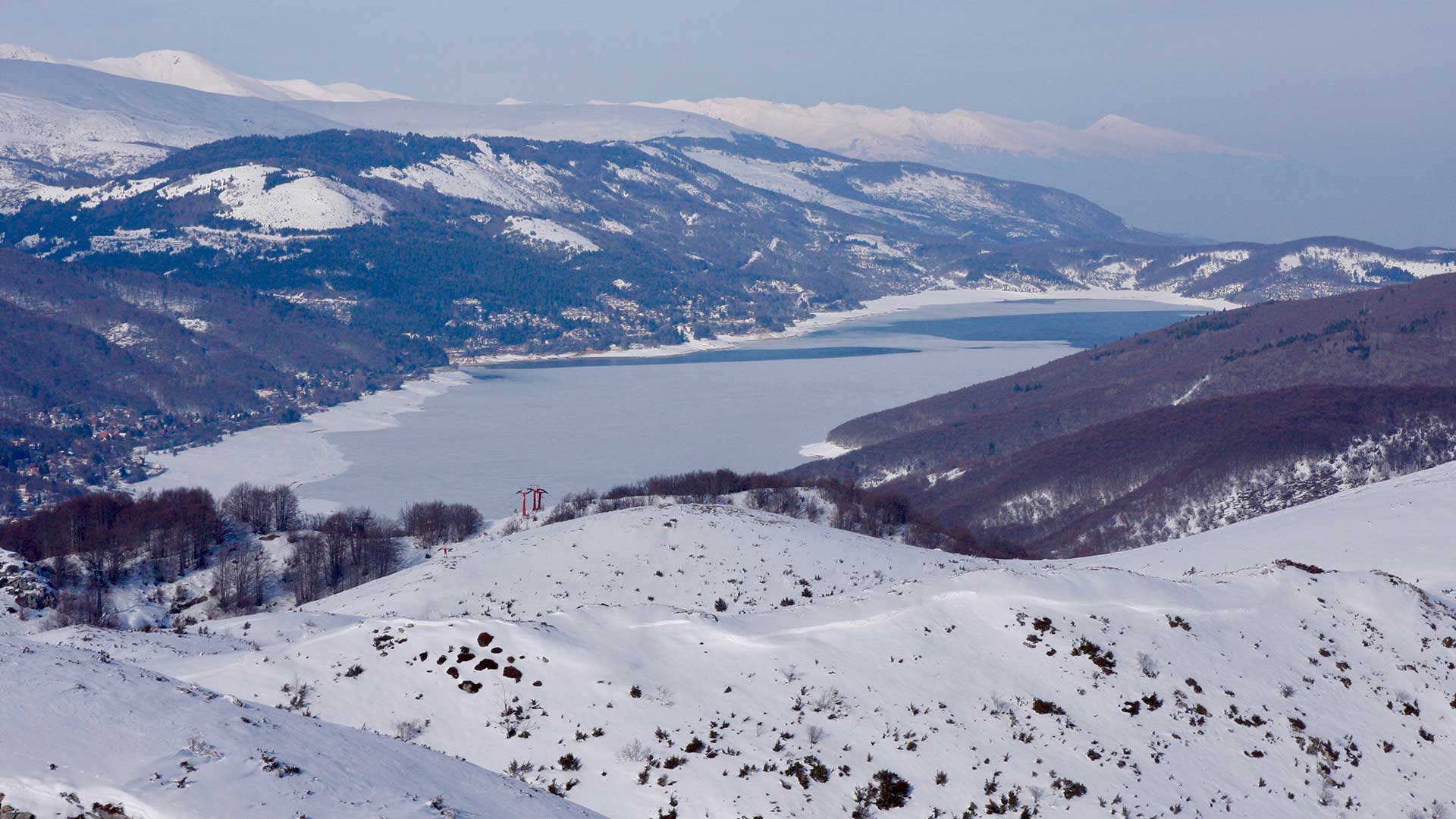 
The beauties of the National Park Mavrovo

Every season has its own magnificence in the National Park Mavrovo. That's why this destination is perfect for summer and winter periods. Once you visit Mavrovo, it will instill in your heart, just as a story. The picturesque villages in front of you reveal mountain landscapes and the mysticism of the Mijak culture. They are: Mavrovi Anovi, Mavrovo, Leunovo, Nikiforovo, Galicnik, Rostushe, Gari, Jance, Tresonce, Bituse and Lazaropole.

Where is the National Park Mavrovo located

The National Park Mavrovo is located in western Macedonia and occupies an area of 73,088 hectares. And it is the largest among the three national parks in Macedonia, Pelister and Galicica. As a national park Mavrovo it was declared in 1949 and its geographical position is 41° 40'N and 20° 46'E. Within the limits of the park are the mountains: Korab, Desat, southwestern branches of Shar Mountain, most of Bistra and the northern parts of Krchin. The central part of the national park Mavrovo covers the valley and the river basin of Radika. The Mavrovo artificial lake is also within the national park. 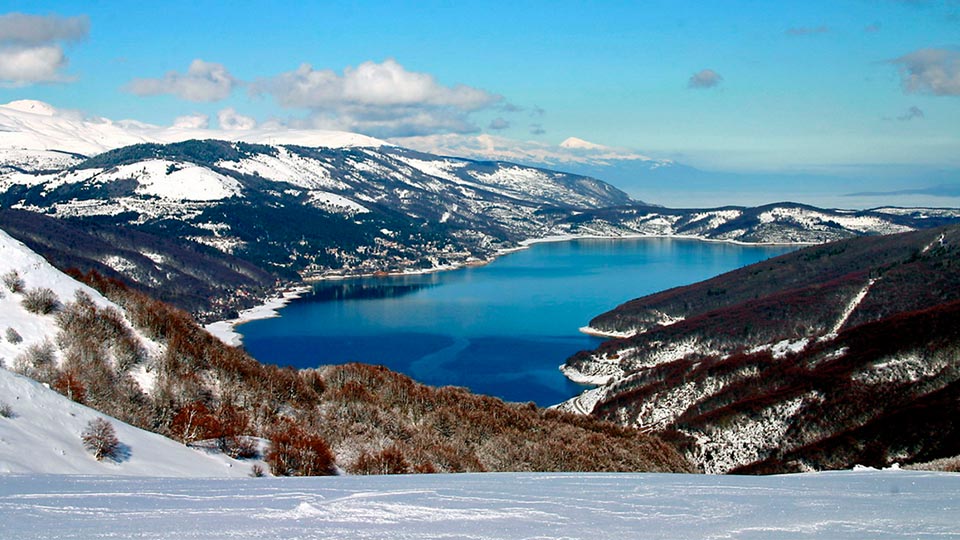 The natural treasures in the National Park Mavrovo call you at every step. Mavrovo has 30 picturesque caves, including the Sharkova dupka cave near Rostushe. Mavrovo also has Lokuv, the lowest glacial lake in Macedonia. The picturesque canyon of the beautiful Radika river gives a special beauty to the park. The many ravines, steep slopes, rocks of different shapes and waterfalls create the diverse and specific landscape of Mavrovo.


Within the boundaries of the National Park Mavrovo, there are over 52 mountain peaks with an altitude above 2000 metres, of which the peak Medenica of the Mountain Bistra, Velivar, Sandaktas and other are more famous. Special importance for the national park Mavrovo is given to the peak Golem Korab (2764 metres above the see level) which is at the same time the highest peak in the Republic of Macedonia and thus the highest point of the park. The lowest point of the national park Mavrovo is 600 metres above the see level and is located at the very place where Mala Reka flows into the river Radika.

Flora and Fauna in the National Park Mavrovo

The National Park Mavrovo has rich flora, with several endemic plant species, as well as with 82 protected animal species. From the vegetation of the park, the largest representation is that of the mountain beech forest community. The fauna of the national park Mavrovo is also characterized by considerable diversity. It consists of 140 species of birds, of which more important are: the grey falcon, the imperial eagle, the golden eagle (аquila chrysaetos), the forest owl, the great owl, the Montagu's harrier (circus pygargus), the pallid harrier (circus macrourus), as well as 11 species of amphibians, 12 species of reptiles and 38 types of mammals. Of the mammals, the most important are: the bear, the lynx, the wild goat and the wild cat.


The terrain offers a wonderful opportunity to explore while riding a horse or while moving along the biking and hiking trails, and the surrounding slopes of the mountains offer you the possibility of camping and long walks.

Cultural and historical monument in the National Park Mavrovo

The trademark of the region is the submerged church "St. Nikola" in the artificial Mavrovo Lake, which hides it to the roof with every rising of the water. Nearby is the archaeological site St. Nikola. The site is a necropolis from the late Middle Ages. During the summer period, when the water level in the Mavrovo lake is smaller, you can see the stone plates from graves and archaic crosses from the limestone. The Mavrovo Lake, on the other hand, is suitable for visitors all year round – in the summertime for bathing, and in the winter, when it freezes, for skating. 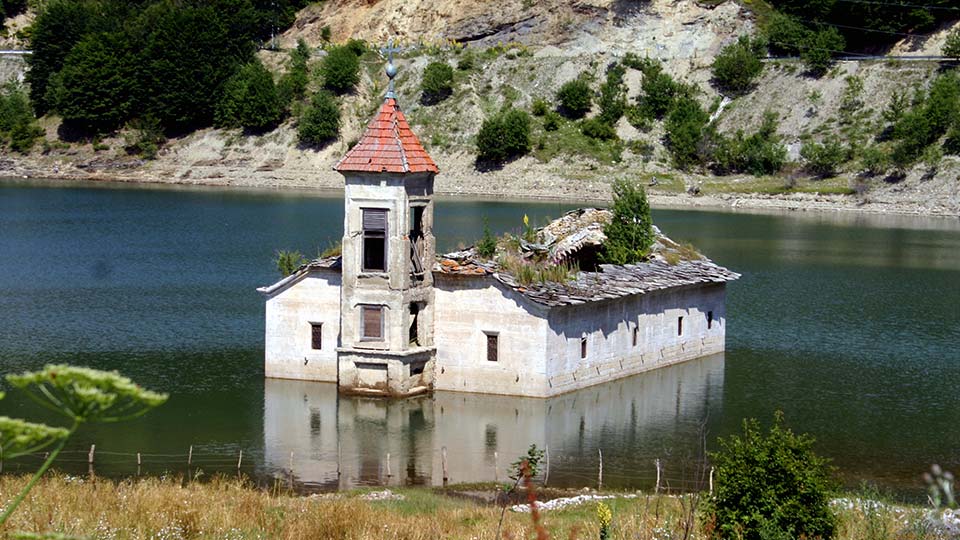 The monastery complex St. Jovan Bigorski dedicated to St. Jovan Krstitel (John the Baptist), is located along the flow of the beautiful river Radika. The monastery of St. John Bigorski is widely known for its iconostasis. It was made by Petre Filipov-Garkata from the village of Gary.

The bridge was built on Mala Reka, about six hundred metres from the area of Boskov Most (Bosko’s Bridge) near the regional road Gostivar-Debar in the National Park Mavrovo. According to the local people and legends, the bridge was built 3-4 centuries ago in memory of the death of an enchanting and magnificent deer. On the mountain Stogovo, in the immediate vicinity of the village of Mogorce, a hunter from the village intercepted a deer when he was going hunting. He raised his rifle to shoot. But when he looked at the deer, he realized that the deer with the warm look and pose seemed to beg him not to shoot, not to kill him.


The hunter was enchanted, he lowered his rifle, got closer to the deer and began to pet him, and the deer hugged him with his head and expressed his friendship. So the hunter and the deer made friends and were spending time together every day. The hunter told the villagers about the meetings with the deer. One morning they went to look for him. They met him and tried to catch him. But the deer began to flee, and in order not to become the prey of the unknown, he tried to skip the river. But he did not succeed in that. The jump was a few feet short and the deer broke his front legs. In memory of the courage and beauty of the deer, the villagers of Mogorce, who were famous masters, built this bridge with unusual structure and architecture.

Within the National Park Mavrovo there is an Information Tourist Centre. The Info Centre is located in the village of Mavrovi Anovi, on the main road leading to the municipality building, that is, at a distance of about 500 m. from the dam in Mavrovo. It has data on tourist facilities in the region. They also issues various types of permits needed for certain activities on the territory of the park. In the centre you can obtain maps for movement and many other things that greatly facilitate the stay of tourists in the National Park Mavrovo. The centre operates every day from 08.00 hrs to 18.00 hrs.

It is held every year on Petrovden (St. Peter's Day) – 12th July and is a cultural event rich in many original, unique and unrepeatable wedding customs and rituals at the National Park Mavrovo. In the days of the wedding, the zurles and drums are heard "from Galichnik to Reka", with all the underground and aboveground sound to the Bistra stone and the sky. Those companions of the migrant workers in this region of Macedonia, always announce the Galichnik Wedding which has the greatest number of wedding guests. The Galichnik Wedding in its long existence has contributed to nurturing the unique wedding customs and rituals of the inhabitants of this region. It contributes to preserving the original songs, folk dances, and the well-known Galichnik costumes-made with filigree precision and correctness of the tailors.

The Duf waterfall is located near the village of Rostushe and it can be reached in 30 minutes from the very centre of the village. The path to the waterfalls is marked, arranged, secured by a wooden fence and it is significantly steep on several spots, but in the most part it is easily passable. To reach the waterfalls one must pass through the Duf Canyon, which is up to 60 metres tall and is a real attraction. The place is also specific for the pleasant climate and the temperature in the hottest summer periods is from 18 to 20 degrees. Through the canyon runs the Rostushe River which is biggest in the spring period. The main attraction and a true holiday for the eyes is the Duf waterfall, according to which the place itself got its name, and it is located at the very end of the canyon.


The best period for visiting the site is from May to July, when the greatest amount of water flows through the Rostushe River and the waterfall. In the area of the village of Rostushe you can also visit the several local restaurants in which you can taste food prepared according to the traditional recipes. There is also a possibility for such foods to be prepared by local housewives.

Sharkova Dupka is located in the Municipality of Mavrovo-Rostushe, in the National Park Mavrovo, close to the winter tourist centre, more precisely in the village of Mavrovo. The cave pearl is located in the immediate vicinity of the last houses of the village. To the entrance there is a 10-minute walk along the built path and stairway. The Sharkova Dupka Cave, which is open to tourists, is protected by an iron door and bars. Decorated with semicircular metal stairs and fully illuminated with reflectors.


The cave is at a depth of 20 metres from the entrance, it is about 18 metres wide and 25 metres long. In the lower part of it there is an opening that leads into two more cave halls that are still unavailable for tourists. The cave was discovered more than three decades ago by the local population who was then afraid to enter it. According to one of the stories related to the discovery of the cave, the villager, nicknamed Sharko, who lived in the immediate vicinity of the cave, was the first who gained the courage to enter. He cut a few trees, lowered them into the hole and, with ropes and with the help of his neighbours, managed to get inside the cave. From there, the cavern beauty got its name Sharkova Dupka.


In addition to this, there are several interesting stories about the cave Sharkova Dupka. A map board is placed in front of the entrance gate, which explains the cave ornaments and rich animal world it is abundant with. Visitors descend into the interior of the cave with iron semicircular scales, which lead into the first pit or yard, about 20 metres below the ground. The temperature there is below 12 degrees Celsius.


The underground beauty is decorated with stalactites, stalagmites covered with coral, drapery and other cave jewelry, which presents the image of untouched beauty. Since the soil is rich in iron, most of the decorations are characterized by reddish-brown colour. In Sharkova Dupka there is a diverse animal world: bats, spiders, lizards, various types of insects. The cave is open for visits by organized groups and is an ideal location for organizing educational and didactic excursions. 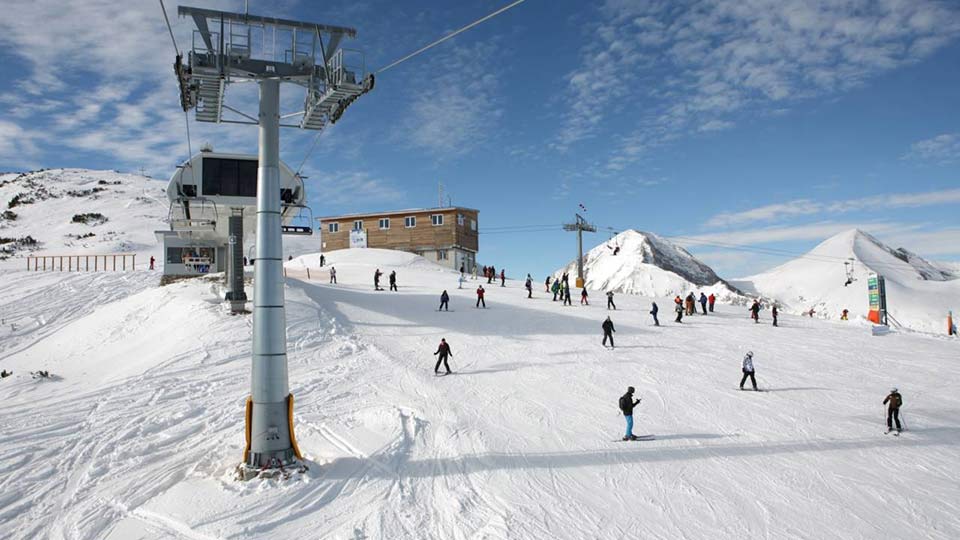 The winter in Mavrovo is enchanting. Then you can visit the snowy town of Bunec and head to the ski slopes. The beautiful snow-covered paths on Mount Bistra will awaken the athlete in you, and the terrain offers the possibility of night skiing. More information can be found on the official website of the National Park Mavrovo. 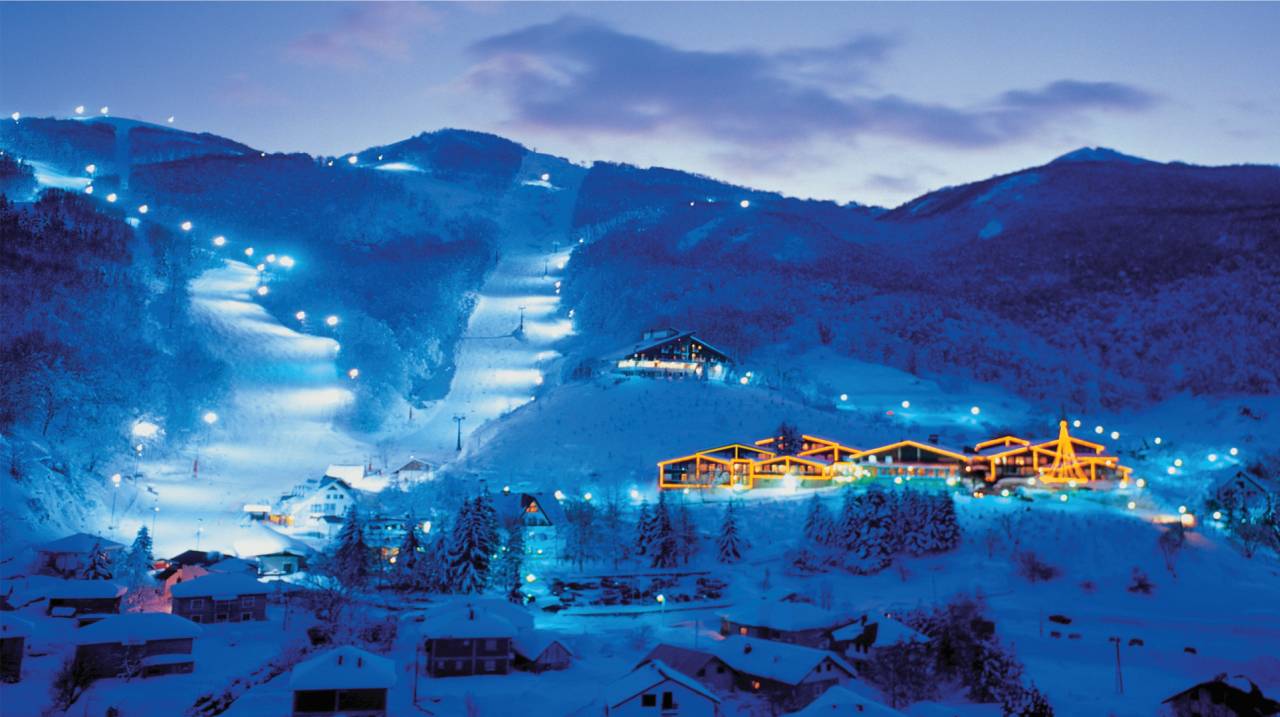