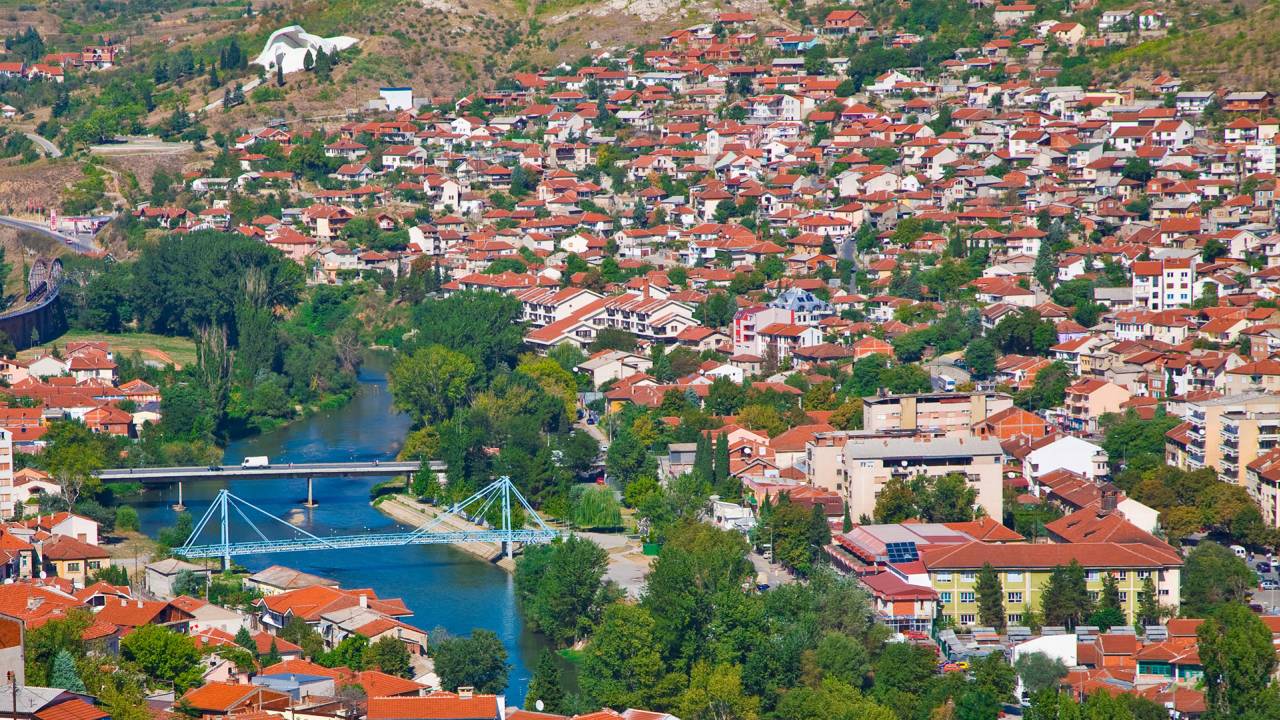 
Veles – A City of Revivalists, Revolutionaries and Poets - a cradle of Macedonian culture

Veles is located in the central part of the country, in the middle course of the river Vardar. It lies on the main road of the Balkan Peninsula along the Moravian-Vardar Valley.

The main railway in the Republic of Macedonia passes through the city, from which two branches are separated: the one for the eastern part of Macedonia (Stip and Kocani) and the other for the southwest part (Prilep and Bitola). After Skopje, Veles is the most important railway node in the Republic of Macedonia. To the northwest of Veles is the capital of Macedonia, Skopje, the city of Sveti Nikole is to the northeast, the city of Stip is to the east, Prilep is to the southwest and Kavadarci and Negotino are in the southeast. Veles has a very favourable geographical position because it is a crossroad of international road and rail routes and one of the major transit centres in Macedonia. Veles is the sixth city by number of inhabitants in Macedonia with a total population of 43,716 inhabitants.

Etymology and history of Veles

Veles is an old city. Throughout history, the city has often changed its name. It is mentioned in the 3rd century under the name Villa Zora, meaning city-bridge. Later, the city was named Kjupurli. Today's name was given in the 7th century with the arrival of the Slavs to the Balkans, from the Slavic V Les, which means in the forest (because of the dense forests that surrounded it). During the time of SR Macedonia, but also in the first years of the independence of the state, Veles was called by the name Titov Veles, in honour of the Marshal Josip Broz - Tito. It played the role of an important traffic crossroad and is a famous trading city with highly developed crafts, and especially pottery.


After the Balkan Wars and World War I, the city lost some of its functions. This reflects on its population development. After the Second World War, Veles was developing in a strong industrial, administrative and cultural centre. The main feature of the Veles economy is the industry: chemical, non-metal industry and industry of building materials, metal-processing, ceramics, textile, food, fur. As a developed traffic node, Veles is a regional centre in the Middle Povardarie. There is a large influential gravitational zone, especially expressed in the mouth areas of the Babuna and Topolka rivers, which spread to the Ovcha Pole and Tikvesh.

Monument of the Gemidzii – “We are sacrificing ourselves for Macedonia ". The monument is dedicated to the twelve gemidzii (sailors), the majority of who were from Veles, and who carried out a series of assassinations on the evening before the Ilinden uprising in Thessaloniki in order to draw Europe's attention to the Macedonian issue. At the end of the monument, their message was written "We are sacrificing ourselves for Macedonia”. 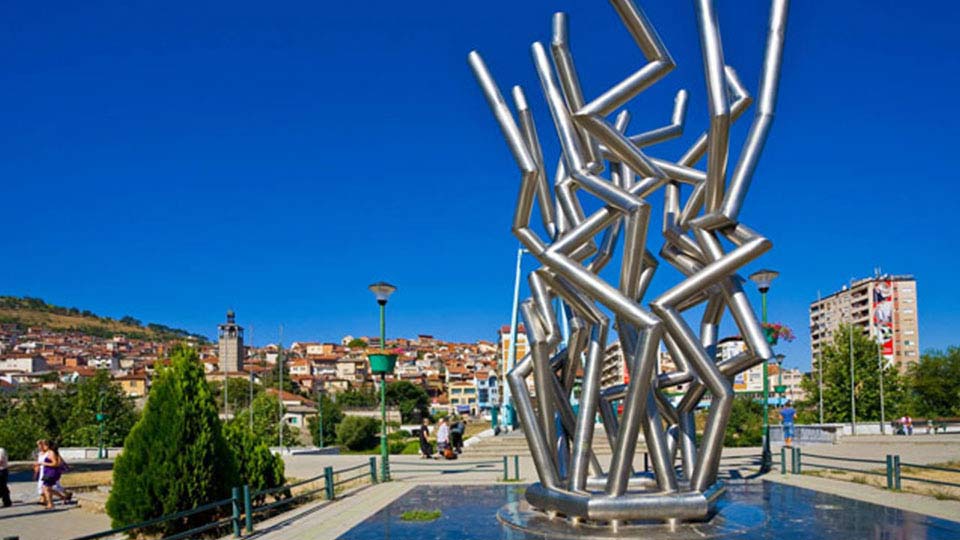 Monuments of Koco Racin in Veles

“Se k’ti nokta crna ... "In honour of the patron of the Veles high school, in 1968, a monument of Kocho Solev Racin was set in his hometown for the first time. The monument is the work of the academic sculptor Dimko Todorovski, who through the supernatural size of the figure of Racin made an attempt to represent the size of the Macedonian people. 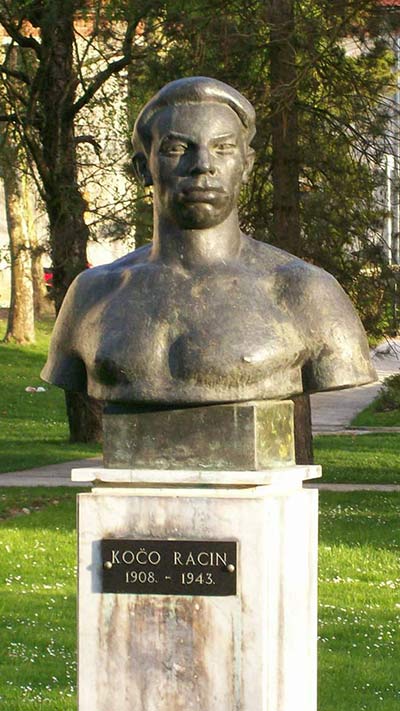 The city cathedral church St. Pantelejmon is located in one cavern southwest of Veles, several hundred metres from the last houses. The church is under the protection of UNESCO and is the Cathedral of the Vardar diocese. The frescoes and icons are the work of famous Macedonian painters from the Mijak, Papradishte and Veles region. Most icons were made by the talented painters Gjorgji Damjanov and Gjorgji Jakov Zografski. 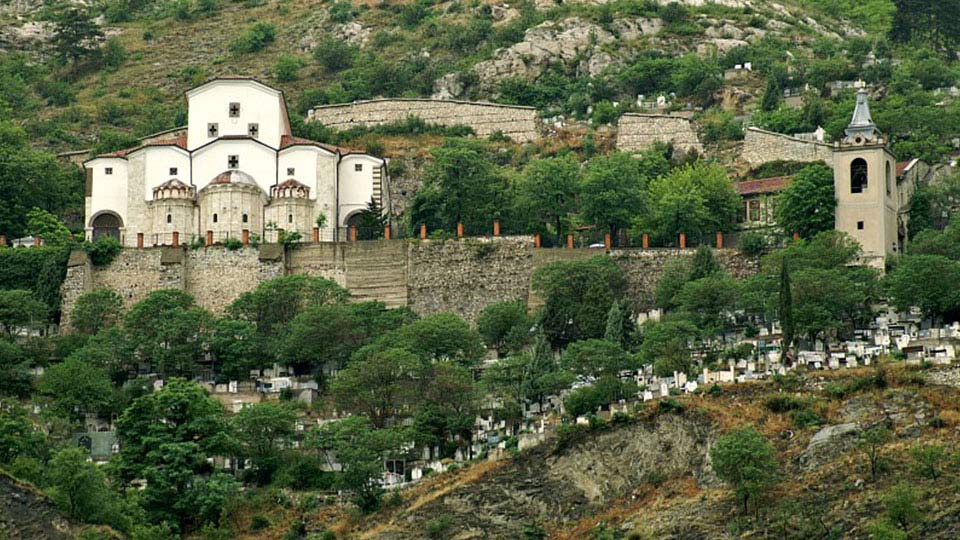 The famous antique - Roman theatre, which functioned in the ancient city of Stobi two thousand years ago, is part of the theatre tradition in this region. The tradition continued by the educator and revivalist Jordan Hadzi-Konstantinov Dzhinot. His written dramatic texts in 1845 provided him with the primacy of the founder of contemporary theatre text. In the famous centre of the centuries-long theatre tradition, in the city of Veles, since 1948 there is a professional theatre, that is, the National Theatre "Jordan Hadji Konstantinov - Dzhinot“. 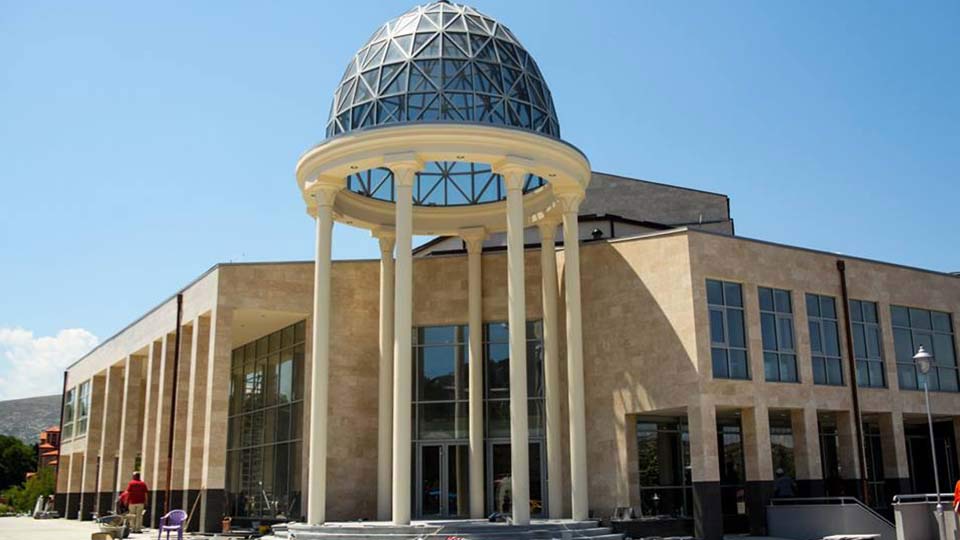 Mladost Lake (Veles Lake) - Artificial accumulation with attractive content and recreation zone. Lake Mladost is located on the river Otovica, a left tributary of Vardar, eight kilometres north of Veles. It covers a basin of 97 km2. The lake is about 2 km long, 0,4 km wide and it covers an area of 0,84 km2. On the lake there is a thin reinforced concrete arch dam, 35 metres high, with a cote of 247 metres. The lake is equipped with the necessary tourist-catering facilities, and with the specially organized and decorated boat-restaurant is a centre and tourism and recreation in this area. 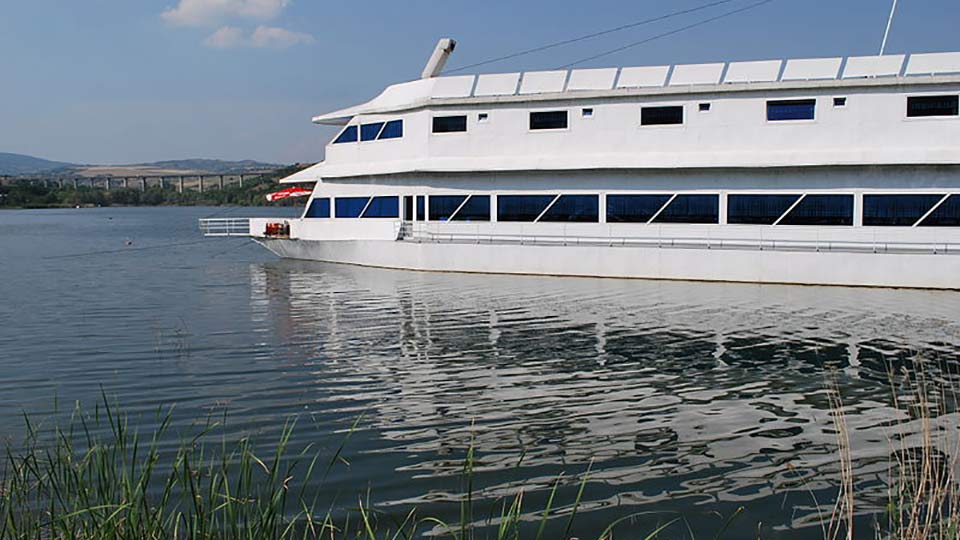 When the millennia will merge into a unique lavish feeling. The ancient city of Stobi was a Paionian, Macedonian and Roman city. The first documented memory of Stobi dates back to the year 197. BC, when the Macedonian King Philip V defeated the Dardan army in that place. In the sources where the Roman historian Titus Livius mentions this data, Stobi carries the epithet of "old city".


The urban part of Stobi is surrounded by walls set at the mouth of Erigon in Axios, today known as Crna Reka and Vardar. The city occupied a very important trade and military position. The fierce struggles of the Macedonians with their northern neighbours were fateful for Stobi. Stobi with the surrounding area definitely fell under Macedonian rule in 217 BC during the reign of Philip V.


Stobi is located near Veles, at the mouth of Crna Reka in Vardar. It is located on the left bank of the river, and it extends to several terraces of land. Under the Macedonian rule, it fell in 217 BC, in the time of Philip V. In the pre-Roman period, it was a small town with an area of 2.5 hectares. Due to its location on the road between the Danube and the White Sea in the Vardar valley, the small settlement becomes strategically important. At the transition from the old into the new era, when it became a Roman province, Stobi became a large and developed municipium (a city with independent administration and a right to vote). The city received its most rewarding appearance in the late Roman period, when it became a significant trading, administrative, military and cultural centre.


The development of Stobi in a city with self-managing status is witnessed by the epigraphic monuments and the coinage of the local coins with the inscription "Municipalities Stobensium", which cover the time from Vespasian in 69 to Ellagabal 222 AD The palaces and basilicas, decorated with frescoes and mosaics, which mostly come from the 4th and 5th century, are particularly evident in the economic and cultural growth of the city. It is the time of the highest flourishing and significance of Stobi when it became the capital of the newly formed province of Macedonia Secunda. In a short time, the city was built on eight times as large an area as the previous settlement. Evidence for the development of Christianity in Stobi dates back to 325.


During this period Stobi was a city with a unique Christian religion in the kingdom and episcopal seat. The Stobi Bishop participated in the First Ecclesiastical Assembly in Nicaea. For the growth of Christianity, the great number of discovered christenings in cathedral churches testifies. The city suffered great devastation in the attacks of the Huns and Ostrogoths in the 5th century. In the 6th century it suffered from an earthquake and was never established again. Stobi's significance is increased by the awareness of the existence of a large number of still unexplored artifacts. 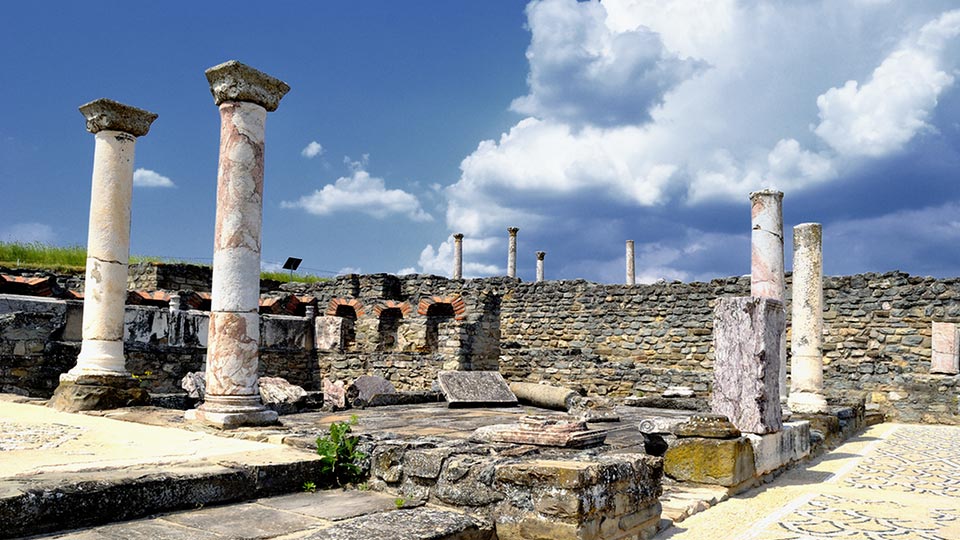 International Antique Drama Festival Stobi.In order to preserve the tradition of the ancient theatre, with the performance of ancient theatre texts on the ancient stage in Stobi, since 1992, at the initiative of the actors of the Veles theatre, performances in the ancient amphitheatre are held in the summer period. Since 2001 this tradition has grown into a International Antique Drama Festival Stobi, which attracts an increasing number of world theatre artists every year. The festival is an attraction not only for the Veles people, but also for theatre lovers from all over the country. This is witnessed by the huge number of visitors ranging from 2,500 to 3,000 per play.


The festival traditionally provides an award for best performance, the directing award and the best actors awards. The ancient stage in Stobi is especially attractive for theatrical artists due to the possibility of creating real spectacles in the ancient setting of the ancient amphitheatre and reviving the texts of Sophocles, Aristophanes, Euripides and other ancient authors.


More information about Veles can be found on this website.