Stip- city below the Isar

Where is Stip located?

Stip is located on the banks of the rivers Bregalnica and Otinja, on the hilly terrain on the slope between Ovche Pole, Kocani Lakavica Valley. The geographical position allows it to have a significant traffic function and beneficial communication with the surrounding neighborhoods. From Stip there are several traffic routes, such as the road routes to Veles, Sveti Nikole and Kumanovo, the road to Kocani, Delcevo and Bulgaria with a branch towards Probistip and Kratovo, the road to Radovis and Strumica with a branch to Negotino in Tikvesh. A railway line passes through the city through which it connects with Veles and Kocani. Due to the favourable traffic situation, road safety, developed crafts and agriculture, Stip is experiencing intensive urban and commercial development. With the construction of the Vardar Railway, the economic development of the city is intensifying. 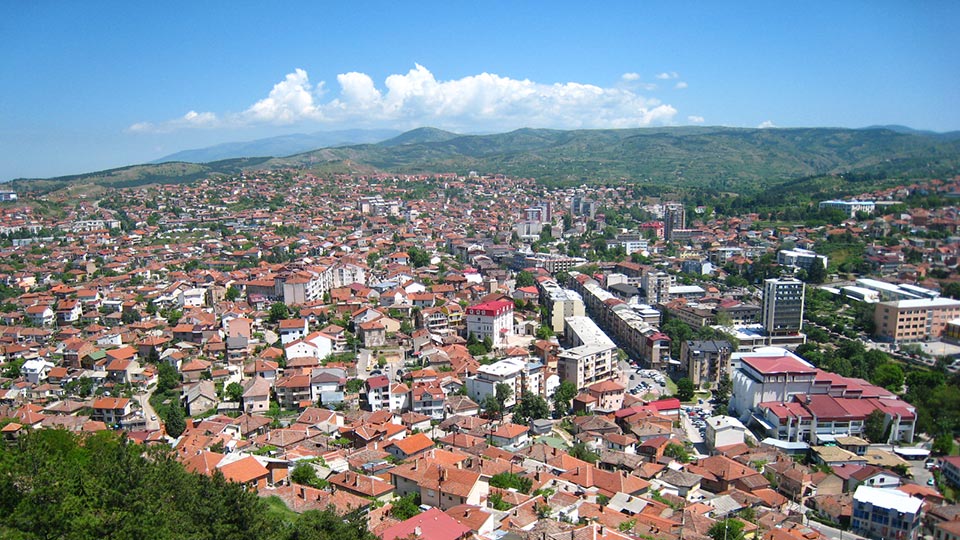 The city of Stip has several tourist attractions important for the development of tourism. In the surroundings of Stip the ancient city of Bargala and the Stip fortress are located. On the fortress "Isar" in Stip the great Christian holiday "Holy 40 Martyrs" and the custom "Chetrse" are celebrated on March 22nd. The first Macedonian custom that is on the UNESCO World Heritage List for intangible cultural heritage. The custom requires you to greet 39 people when climbing to the top of the fort, and to kiss the 40th person. The young girls and boys, leave the one they like, as last. 39 stones are also thrown away, and the 40th stone should be brought home, and then placed under a pillow. It is believed that the person appearing in the dream will be the girl’s partner for life.

Bargala is one of the most important late antique cities in Macedonia, located 20 km northeast of Stip. The city is a fortress surrounded by walls and towers, with monumental entrances and gates, dating from the 4th to the 6th century. With walls thicker than two metres, it was built by the Romans as a military camp, and then turned into a civilian settlement and an early Christian episcopal centre in the Bregalnica region. In the 5th century, especially in the time of Justinian I, Bargala reached its peak, but at the end of the 6th century it suffered repeatedly during the Avar and Slavic conquests. 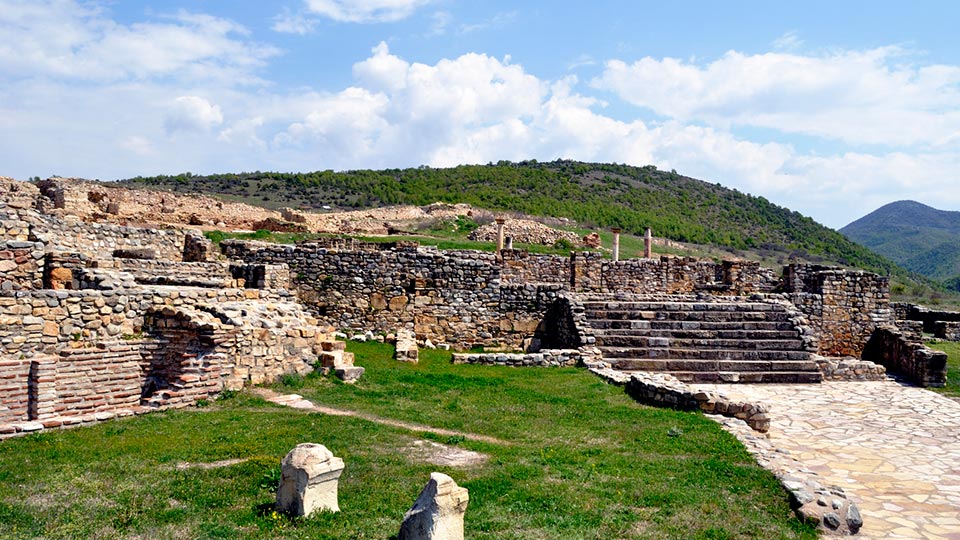 In the Middle Ages in Bargala a new settlement was established. The site abounds with archaeological findings. Particularly striking are the floors of the basilica erected at the end of the 4th century, and restored in the 5th and 6th century, of which the most beautiful is the floor of the presbytery, coated with white and gray plates. The water reservoir and the two baths (late antique large and small bath) are a well-preserved complex facility with individual interconnected rooms. Parts of commercial and residential buildings were also discovered in Bargala. Today in Bargala you can see the basilica, the water reservoir, the impressive gate and a large part of the city's infrastructure. Part of the city wall and the main gate are completely conserved. Only one tenth of the whole site has been explored, as it covers an area of about 5 hectares. 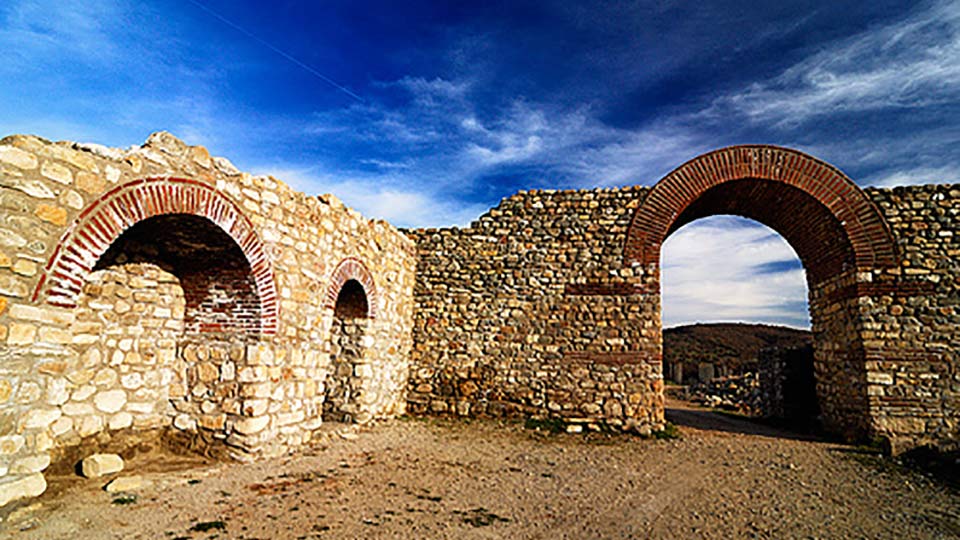 The fortress Isar or the famous Stip Kale is the main feature of this city and delights with the wonderful panorama of Stip. It is located on the elevation holding the same name, which rises 120 metres above the mouth of Otinja in Bregalnica, on the western periphery of the city. On the hill there are stone monuments dating from the 2nd century to the 6th century, as well as remains of an early Christian basilica from the 6th century. In the military invasions against Emperor Samuel, the Byzantine Emperor Basil II conquered the Stipeon fortress, and after the conquest of Stip by the Turks, for at least two centuries, the fortress was used as their stronghold. 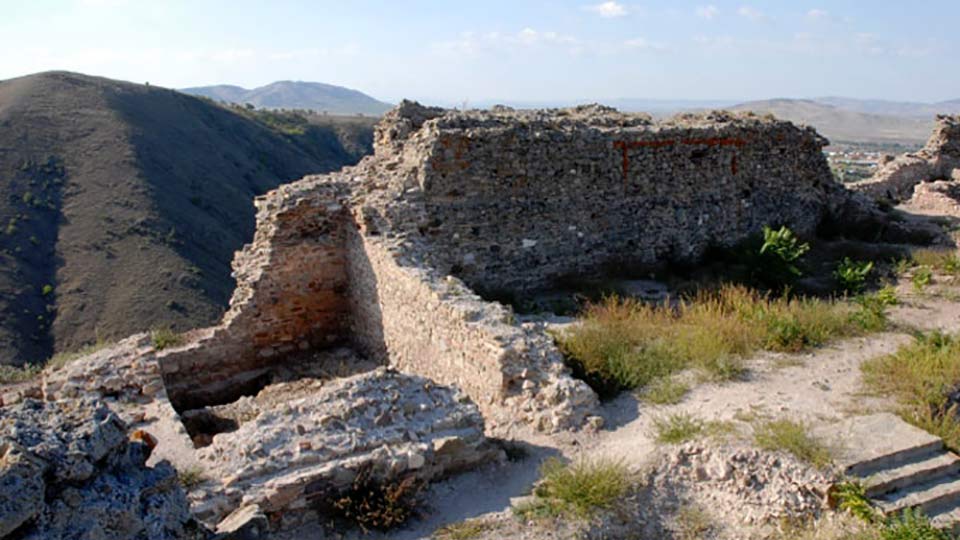 Today's appearance of the fortress dates back to the 14th century. The fortress consisted of two parts: a fort (a castle) with a length of 160 metres and a maximum width of up to 20 metres, and an economic part, with a length of 250 metres and a width of 50 metres. In 2009, 30 metres from the tunnel leading from the river to the top of the Isar were discovered, which confirmed the legend that Stip was conquered by the Ottomans through a secret tunnel under the Isar. The whole fortress is surrounded by a wall that follows the configuration of the terrain, in the north-south direction of about 350 metres along one isohypse.

The fort (castle) of the Isar

It is located on the highest part of the hill and occupies a space of 106 metres in length and 20 metres in width. The western wall is placed on the edge of a steep slope and is constructed following a straight line. The southern half is about 1.5 m wide and auxiliary structures were leaning on it (from the inside). The northern half of the same wall is extremely massive, 2.65 m wide and the palace rests on it from within. A series of large-beam holes on it indicate that the palace had a basement and at least 1 and possibly 2 floors.


The northern part of the space ended with a triangular tower that is now ruined. In the north and south of the enclosed area, two rainwater collecting basins are hollowed up in rocky soil (they are are about 4x5 and 4x 8.7 m large). The northern cistern is placed diagonally on the fold and originates probably from an older age (late antiquity?). In the middle of the eastern wall (which is maximally demolished), the main tower (donjon) is placed, which is, 9.8 x 8 m large and today it is 12 m high (measured from the eastern foot). Beside it, on the south side there was a gate for entrance to the castle. On the north side of the tower, the guardhouse for the inner (doubled) port was leaning; through this gate people entered from the front yard in the yard of the palace. The castle's plan is complete and compact and indicates a construction effort.


The commercial part of the castle (zwinger)

It extends on the slopes north, east and south of the palace, on a space of 250 m in length and 50 m in width in the north, and 60 m in the south section. The wall is located mainly around the southern part of that area. One port is visible in the middle of the east wall (leading to the under-town area), and another port stood on the southwest wall, at the place where it rested on the wall of the palace. For greater security in the event of an attack, both gates were mounted laterally in the direction of the wall.


The easiest approach is from the north, along the narrow slope that descends towards the river, but in that part the wall is maximally demolished. In that space numerous rectangular inclines are also vsible, encased in a steep rocky slope - the basements of houses standing here. The construction features of the lower wall indicate that it was built in the same period with the palace at the top, in the course of the 14th century. The enclosed area measures more than 1 ha and contains the facilities for the servants and the guard, the workshops, the stables, the warehouses and the remaining commercial facilities of the master. In the late 14th century, this area probably served as an escape for the citizens of the Stip under-town area. There are numerous traces of the medieval under-town area in the eastern foot of the Isar. On the north side, the church of St. Archangel of the 14th century is located. It is the core of today's city of Stip.

Cultural and historical monuments in Stip

The city of Stip is an important cultural-historical city of Macedonia. It has cultural and religious buildings and many material monuments. The City Museum from 1952, a city library from the 19th century, the old school, where Goce Delchev worked, are located in Stip. 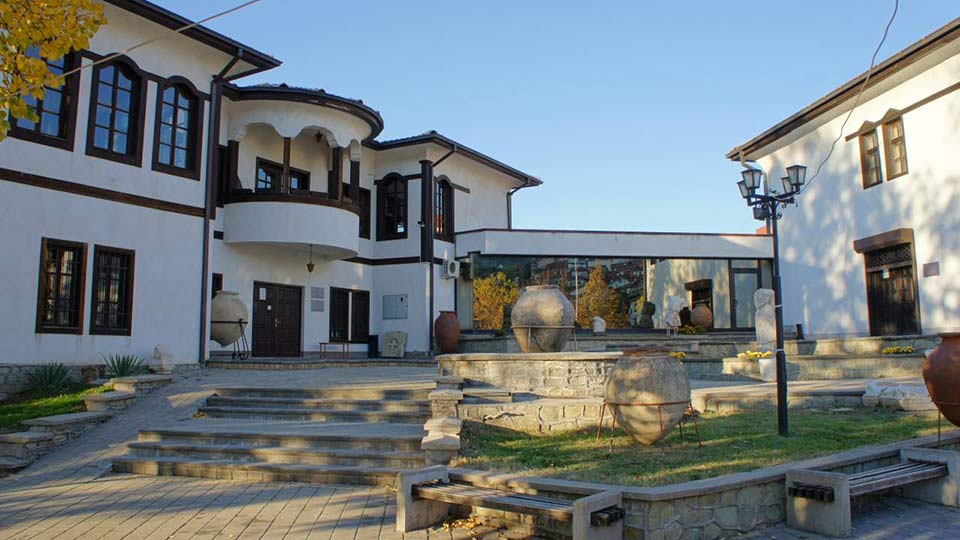 The church "St. Nikola" is one of the most representative sacred facilities in Stip. The church was built by Andreja Damjanov on the place of an older church from 1341. According to the inscription above the main western entrance, the church was completed on May 10, 1867. The church is distinguished by a grandiose iconostasis containing numerous valuable icons. On the northern part of the iconostasis there are 16 icons, and on the main iconostasis there are 67 icons, most of them painted in 1890 by Dimitar Papradiski. In 1990, within the church a gallery of icons made by famous painters between the 17th and 19th centuries was opened. Additionally, in the gallery there are old books, silver crosses, bowls for religious service, wedding crowns, psalms, gospels and other sacred objects.

Husa Medin Pasha Mosque or the Church of the Holy Prophet Ilija was built on the hill above the southern coast of the Otinja River. The location is on a dominant position above the city; therefore, the church was destroyed in 1882 and converted into a mosque. The church was known as the priest Stariev Church, built by Konstantin Dejanovic in 1381. According to some sources, the mosque dates back to the 17th century. Right next to the temple is the tomb of Husa Medin Pasha.

Stip is famous for the fact that the first opera in Macedonia was shown exactly in this city. It was the opera "Clowns", performed in 1924 by the Russian musicologist Sergei Mihaylov. As from 1989, every November, in Stip, the biggest festival of popular music in Macedonia "Makfest" is held..


More information about Stip can be found on this website.