Location of the Bigorski Monastery

The Bigorski monastery St. John the Baptist/Jovan Krstitel (or Svestena Bigorska Obitel) - a monastery on the road between Gostivar and Debar. In the immediate vicinity are the villages of Rostushe, Bituse, Velebrdo and Trebiste, along the river Radika, in western Macedonia. According to the Bigorski monument, the monastery was founded by the monk Jovan in 1020, and in the 16th century the monastery was destroyed by the Ottoman authorities and only one small church remained from the whole complex. 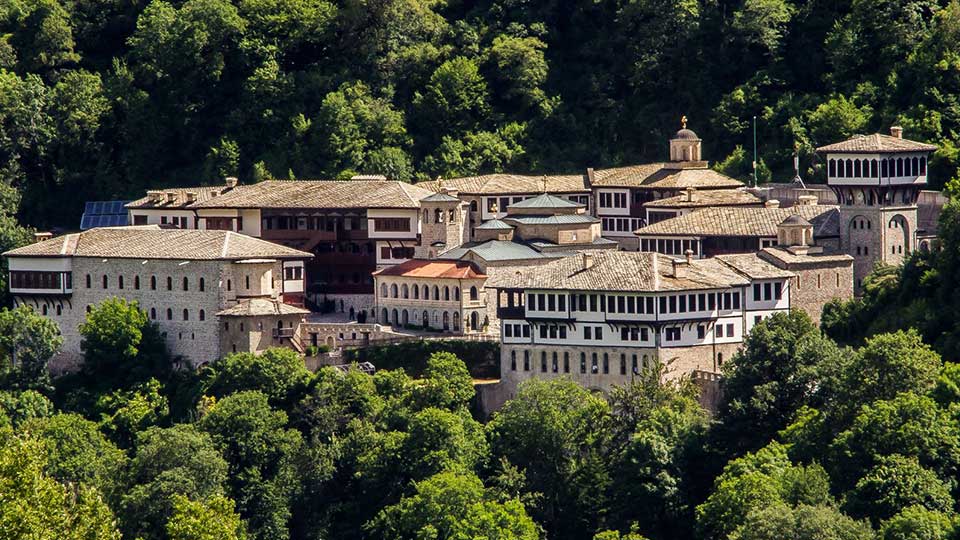 
The iconostasis in the Bigorski monastery

The monastery of St. Jovan Bigorski is widely known for its iconostasis. It was created by the craftman Petre Filipov-Garkata from the village of Gari, along with his brother Marko Filipov, Makarij Frchkovski from Galichnik and Avram Dichov with his sons Vasil and Filip, from the family Filipovski from Osoj. In the period from 1829 to 1835, they manage to create a wonderful artistic wooden procedure. The iconostasis is divided into six horizontal belts. The first in the base is composed of rectangular fields, which have flora and fauna ornaments. The second belt in which the throne icons are found ends with a figure of an eagle with spread wings. The third belt is divided into three smaller horizontal partitions, in which angels, bunches, branches of vines, etc. are symmetrically distributed.

Above them are two rows of icons - festive and representing the apostles. In the central party is the great cross on which the crucifixion of Christ is represented. On both sides of the cross there are figures of a dragon from whose mouth the icons of St. Jovan Krstitel and Presveta Bogorodica are lifted. Besides the iconostasis, Bigorski Monastery is also known for the icon of St. John the Baptist/Jovan Krstitel, believed to have miraculous power. According to the tradition, the icon was found by the monk John in 1020. It came itself to the place where Bigorski Monastery was later built and floated above the springs of the Radika River.


In the 16th century, during the time of the Sultan Selim II, the Ottomans burned Bigorski Monastery, and the icon disappeared mysteriously, and then returned even more mysteriously undamaged. In the monastery books it is written that the icon of St. John the Baptist was not protected for 35 years and that in 1885 the icon was coated with silver armor. On the icon John the Baptist is portrayed as a Saint with three hands. It is believed that the third hand gave blessings and that the icon helps parents who can not have children.


More information about Bigorski monastery can be found on this website.