Information on the Polog Region

The Polog Region is one of the eight statistical regions of Macedonia. The region is located in the north-western part of the country and is bordered by the Southwest Region and the Skopje Region.


Location of the Polog Region

The Polog region is composed of the Polog valley with the mountain massifs that surround it: Shar Mountain, Zeden, Suva Gora, the Mavrovo plateau, the mountain massif Bistra and the valley of the river Radika, with a total area of 2.416 km2 or 9.7 percent of the territory of Macedonia. The region has 184 settlements, of which 182 are rural and 2 urban settlements (Tetovo and Gostivar). The Polog region is divided into nine municipalities. The administrative centre of the region is Tetovo with 53 000 inhabitants. The valley features a typical plain with an altitude of 400 to 500 meters and steeply elevated picturesque mountains that reach over 2700 meters above sea level. There is a great geological, relief, climatic, floral and anthropogenic diversity. The Polog planning region has a total of 304,125 inhabitants. 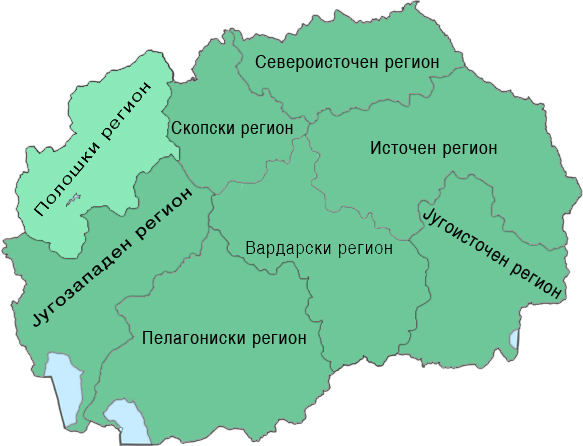 Traffic routes in the Polog Region

The region has decent roads and one highway: Skopje–Tetovo–Gostivar, one railway line Skopje-Tetovo-Gostivar-Kicevo, several cable cars and ski lifts at the ski resorts Popova Shapka and Mavrovo. From this region the roads lead towards the Mavrovo - Debar region and towards Kosovo. There are a number of local routes throughout the region.


The Climate in the Polog Region

The Polog region has a typical continental climate with special temperature specificities with hot summers and cold winters, with a sharp transition from winter to summer. The average annual temperature in the Polog region is 11 C in Tetovo, and about 10 C in Gostivar, while in Popova Shapka it is 4.6 C, so that in the mountain massifs in this region a typical mountain climate is dominant. In Polog, the average annual rainfall is 800 mm, and in the mountains 1100 mm. The precipitation is more pronounced during the winter period of the year, and a large percentage of them are snow falls creating conditions for winter sports and tourist activities.


Natural Resources, Flora and Fauna in the Polog region

The Polog region is recognizable by the highest mountains in the Republic of Macedonia.The Mountain Korab is a typical Alpine mountain with many peaks higher than 2,500 meters. Here is also the highest peak in the country, which is Golem Korab (2,764 m). This mountainous area abounds with natural beauties, with 12 permanent glacial lakes, with deep and attractive river valleys, with ravines and canyons (the 42 km-long Baricna canyon of the Radika River), with rapids, waves and waterfalls (Korab Waterfall on the river Dlaboka Reka, which is 136m high), with rich vegetation (Korab is part of the National Park Mavrovo), with suitable tracing trails, ski trails, etc. 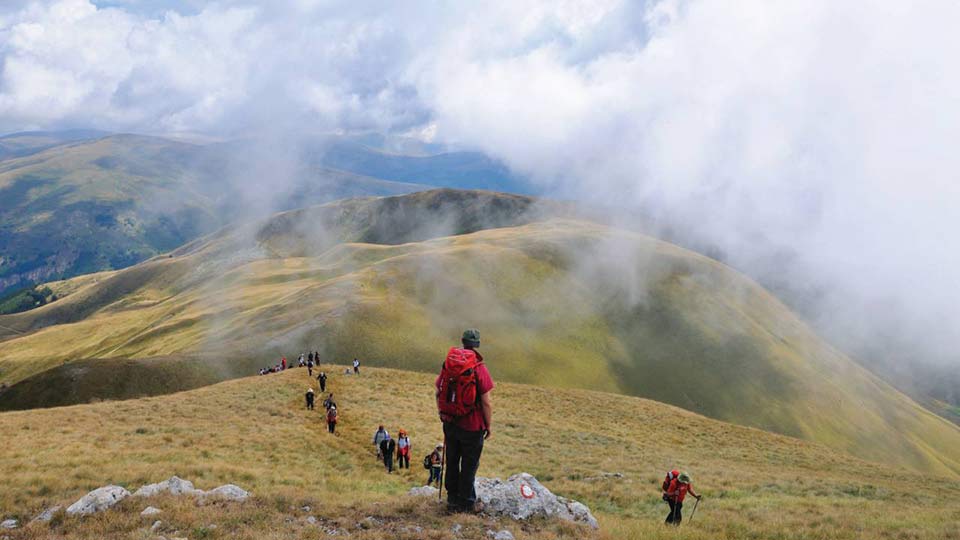 In this region is the largest national park in Macedonia — the National Park Mavrovo, on the southern coast of the Mavrovo Lake. The National Park has opened a tourist information center, where tourists can receive all the necessary information related to their stay and the park's offer. Second mountain in height in the Republic of Macedonia, and the first in mountainous areas is Shar Planina. It is a typical mountain with alpine landscapes on high and steep peaks, with mountain lakes, high waterfalls, remains of old plowing valley, but also flattened crests. 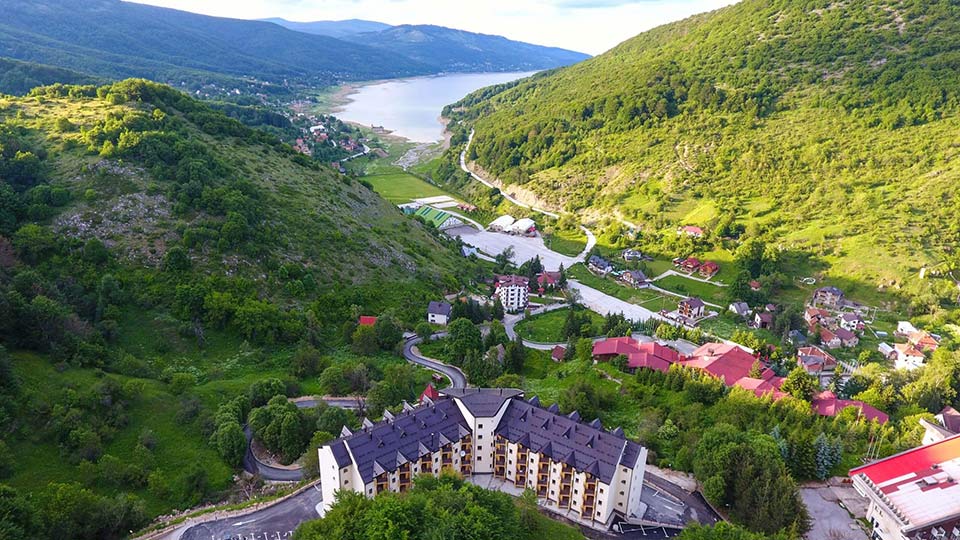 The area of Shar Planina is 912.7 km², it is 80 km long and 10 to 20 km wide. It has 77 peaks higher than 2000 meters. The highest peak of Shar Planina, is Titov Vrv with (2747 m), Sogovo (2.268 m), Bistra (2.163 m). Other high mountains in the Region are: Deshat (2,373 m), Krchin (2,341 m). There are 30 glacial lakes on the mountain Shar Planina. The largest are Bogovinsko Ezero, Crno Ezero, Belo Ezero, Golem Gjol, Mal Gjol, Golemo Ezero, Malo Ezero etc. On the mountain there are numerous attractive sites, such as: Popova Shapka, Leshnica, Jelak, Mazdraca, Tri Vodi, Ljuboten etc. On the site Popova Shapka is the winter ski resort "Popova Shapka" which is a settlement with numerous holiday homes, hotels, restaurants, excellent ski fields, cable cars, ski lifts, mountaineering house and so on. 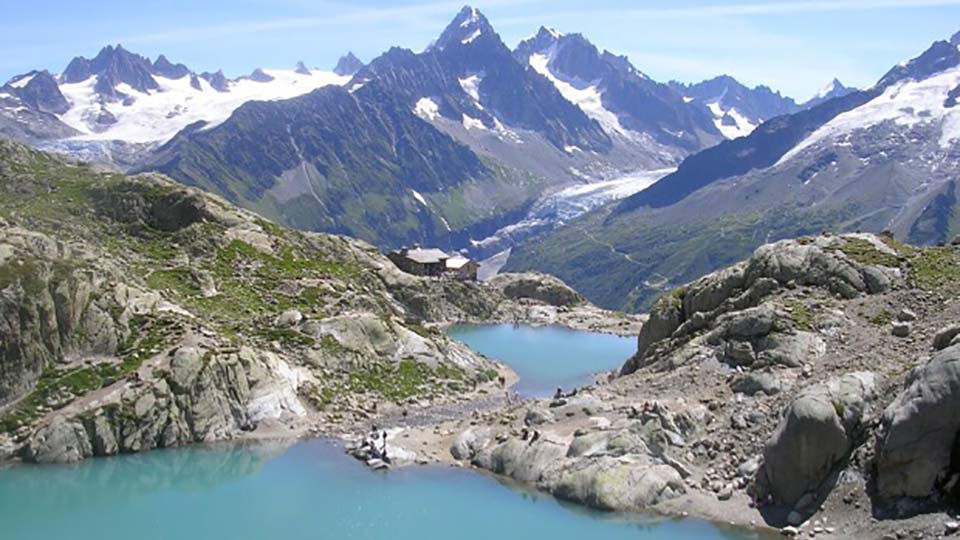 The region abounds with springs. The most significant are the upper flow of the river Vardar to the Derven Ravine, the picturesque valley of the river Pena, Lakavica and a large number of mountain rivers. Relief dissection, relative height differences, geological diversity. The presence of water and the characteristic climate allow for the development of a diverse floral species represented by a diverse dendroflora (beech, oak, birch, chestnut, hornbeam, pine) and grass vegetation with the presence of endemic species of rare species. In the region there are various types of big and small game: bear, wolf, deer, wild goat, wild boar and various species of birds and reptiles.

The Polog Planning Region is abundant with mountainous areas and winter sports centres. These are the Popova Shapka Ski Centre (1.780 m. above the sea level) and the Mavrovo Ski Centre (1.270 m. above the sea level). At both centres several tourism, sports and recreational activities such as: skiing, hiking, mountaineering, paragliding, cycling, hunting, fishing, etc. are actively practiced. Several cable cars and ski slopes are concentrated here, there are also two larger weekend settlements, as well as the largest number of accommodation facilities and high-level catering facilities in the region. At the same time winter events are organized, and especially well-known are the "Shar Planina Ski Cup" and "Mavrovo Memorial", which are visited by thousands of domestic and foreign tourists. 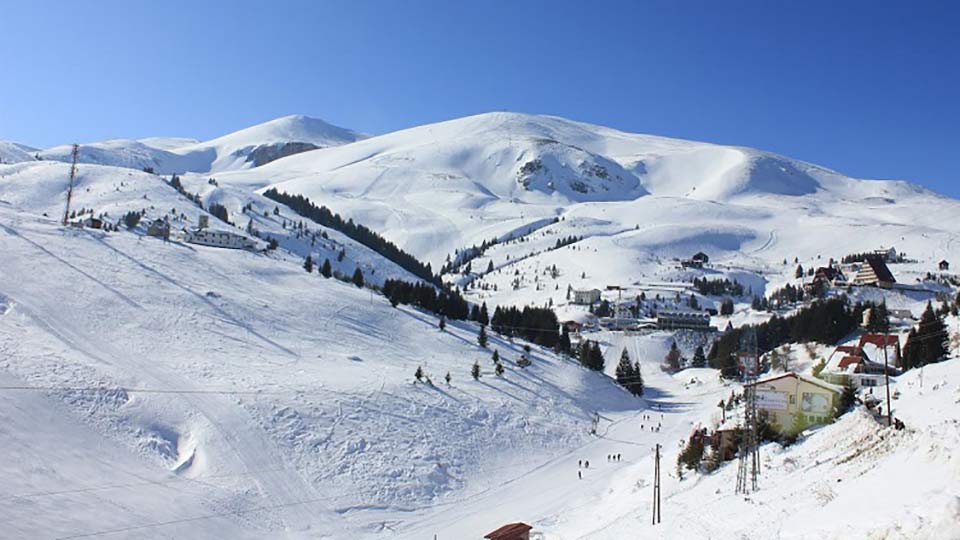 The third high mountain in the region is the mountain Bistra, which is the second most important mountain with winter sports activities. Here is the "Mavrovo Ski Centre". Bistra is part of the Mavrovo National Park. This mountain is lower, and the highest peak is Medenica (2,163 m) and is smaller than the area of Shar Planina (with 572 km²). Bistra has a variety of geomorphological surface and underground relief forms. Such as: the glacial relief, depressions, hollows, karst fields, lost rivers, caves, abysses, river springs, canyons and other. 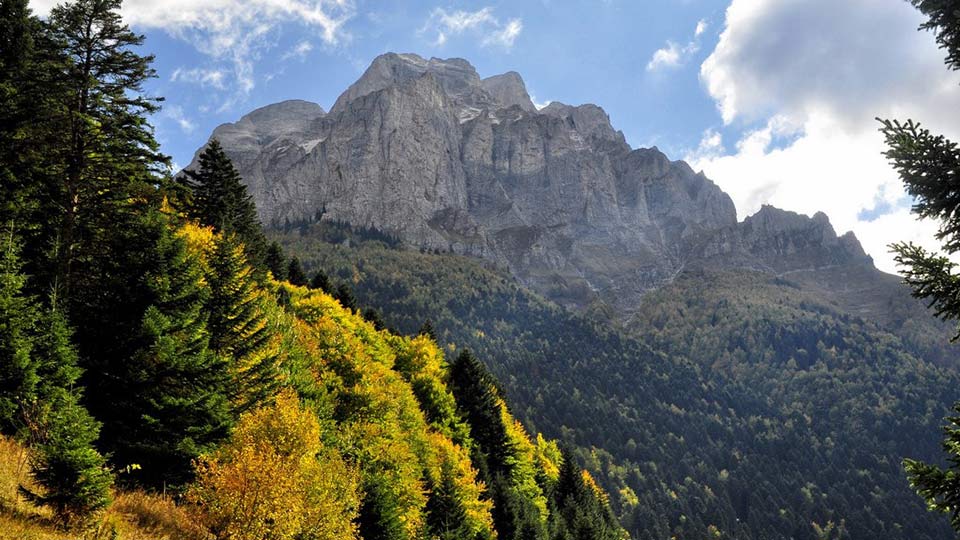 Rivers in the Polog region

On the Radika River lies the most attractive canyon in the country, the 42 km long canyon Boric, with hundreds of meters high vertical sides. Geologically, in the Polog planning region, a large area belongs to the limestone composition. Thus, there are various karstic areas and underground forms. Of these, the caves are the most attractive. For tourists we recommend the caves Sharkova Dupka on Bistra (a cave that is adapted for visits) and Gjonovica or Ubavica (Beauty) on the Bukovik Mountain, as well as the caves of the Suva Gora Mountain.


The longest river in the Republic of Macedonia has its spring in the Polog region. It is the river Vardar, with a length of 301 km. Other famous rivers are: Pena, Radika, Mavrovska, Bogovinska, Mazdracha, Padalishka and so on. The most famous spring in the region is the karst spring of the river Vardar, known as Vrutok, with a capacity of 1.5 m³ water per second. The village of Vrutok is famous for the spring of Vardar, the hydropower plant holding the same name and the specialized fish restaurants, today Vrutok is a modern village settlement with enormous potential for eco-tourism. The Golden Trout was created for the first time in the Vrutok's fishponds, and later the Silver Trout.

Lakes and waterfalls in the Polog region

The Mavrovo Lake was created in 1947 and it is located at 1 200 m asl. It is 10 km long, 5 km wide, and 50 m deep. Here, in the Polog planning region, there are several mountain lakes, the most numerous of which are on Shar Planina. There are eight on the mountain Korab, the most famous of which are the Korab and Kobilino Lake. On the Deshat Mountain there are five - Sveta Nedela, Lokuf and other, and on Stogovo, there are three - Gorno, Dolno and Marusha.. 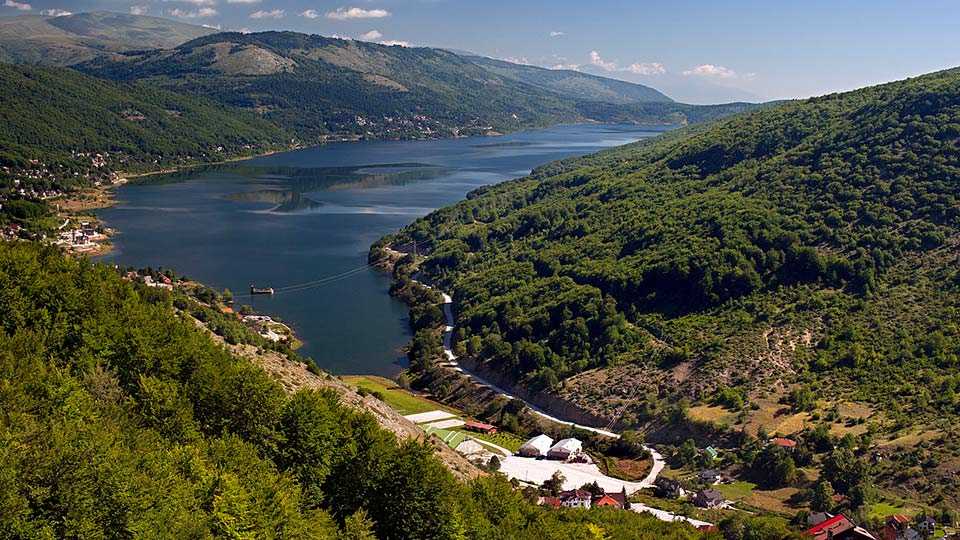 In the Polog region, is also the highest waterfall in the country, and it is Dlabok Dol, 136 meters high. There are several waterfalls on Shar Planina, the most famous of which is Belovishki Vodopad with a height of about 80 meters. Another famous and visited waterfall from the tourists is Duf, 28 m high, located near the village of Rostusha. The Mavrovo National Park was declared in 1949. It covers an area of 73.088 ha. Within the park are the Mavrovo Lake, the mountains Bistra, Desat and Korab, as well as parts of Shar Planina and Krchin and the mouth of the river Radika.

Natural and cultural-historical heritage in the Polog Region

From the cultural and historical heritage in the Polog region, according to their tourist potential, especially distinguished are the: cultural-historical monuments in Tetovo, the monastery St. Athanasij or the Lesok Monastery (1335), Sharena Dzamija (the Painted Mosque) (1495), the Arababati Baba Tekhe (XVIII), the Tetovo Kale, the cathedral church of St. Cyril and Methodius, the church Bogorodica (Holy Mother of God), the monastery St. Naum on Popova Shapka, the church of St. Nikola. Famous cultural and historical monuments in Gostivar are the: Clock Tower, Church of St. Nikola, the church Uspenie na Bogorodica, etc. In the valley of the river Radika is the famous monastery St. Jovan Bigorski (XVI).

The Lesok monastery in the village of Lesok has two churches: St. Atanasij and Bogorodica. The Church Bogorodica was built in the 13th century. It is mentioned in the decree of Stefan Decanski from 1326. The Church St. Atanasij was built in 1335, by the monk Antonij, who later became the first Polog Bishop Joanakij. The latest archaeological excavations revealed significant data, which testify that the building lies on an old VI century church. In the monastery complex is the tomb and the memorial with the epitaph on the tombstone of Kiril Pejcinovic - one of the most important Macedonian revivalists. Next to the monastery is also the hospital for lung diseases. The monastery complex (along with the lodgings) during the year is visited by many believers and tourists and is suitable for summer monastery tourism. 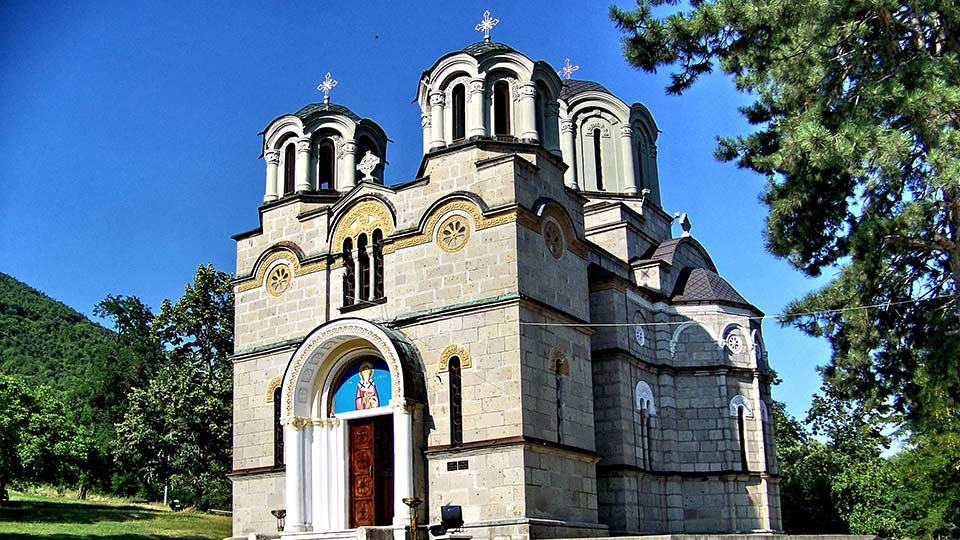 Sharena-Painted (Aladza) Pasha Mosque is located in the old part of Tetovo. The construction of the original mosque dates back to 1495, and its legators are the two sisters Hurshida and Mensure, buried in the eight-sided turbe, in the courtyard of the mosque. In 1833, the mosque was renovated and expanded by Abdurahman Pasha. The mosque is significant for its interior and exterior painting decorations. Architecturally, it is a square building in which the Baroque and neoclassical Ottoman style are reflected. 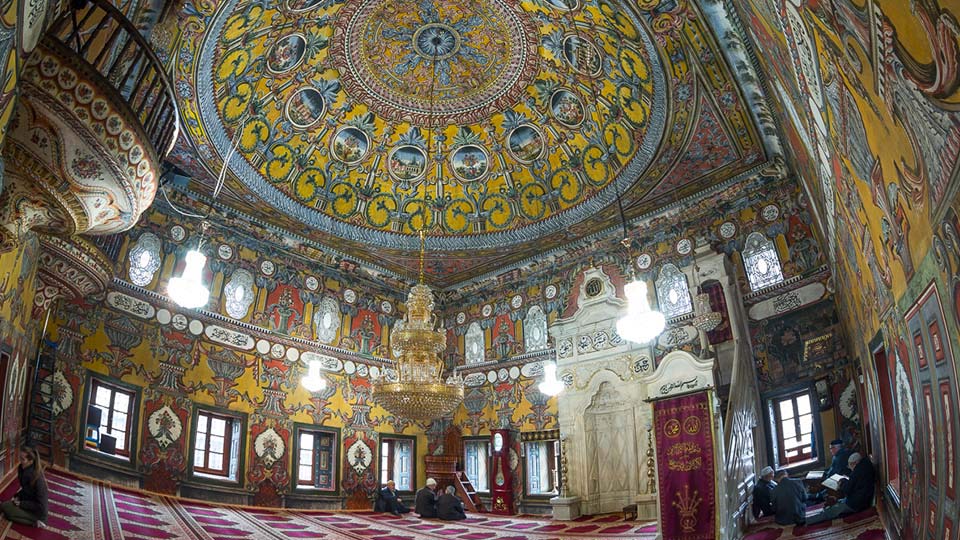 Arababati Baba Teke in Tetovo was built in the XVIII century by Redzep Pasha and his son Abdurahman Pasha. The teke represents a complex of religious buildings, grouped around the turbe (grave) of the sufi Sersem Ali Baba. Nowadays preserved are: the basin, turbe, tower, several fountains, kitchen, dining room, guest accomodation, dervish hane (the deke was used by the dervish order - sufis known for their dervish life), haremlak, lots of greenery, flowers and fruit trees. Today, in this complex of religious buildings, the National Museum of Tetovo is located. 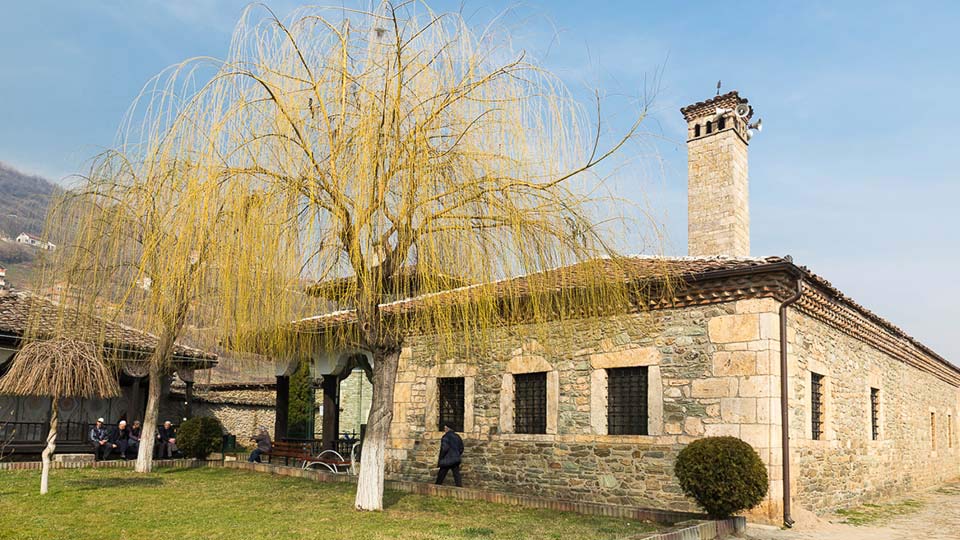 Rexhep-Pasha began to be built the fortress and its construction lasted for 20 years and was completed by his son Abdullahman Pasha in 1820, but he also failed to open the building because he was summoned by the sultan and left for Istanbul and never returned to Tetovo. Therefore the fortress was left uninhabited and unused. The archaeological complex consists of five serraglios, large kitchens, a bath and one well in the middle. On the fortress there are remains of a complex of warehouses, kitchen – dining room, towers, an underground prison and three tunnels. From the older remains, there is a medieval church from the 14th century – dedicated to St. Athanasij. 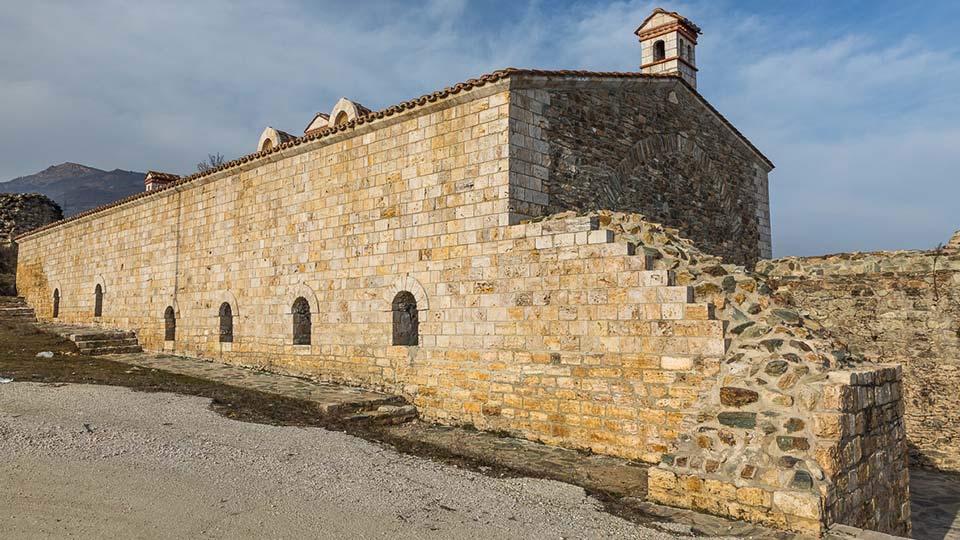 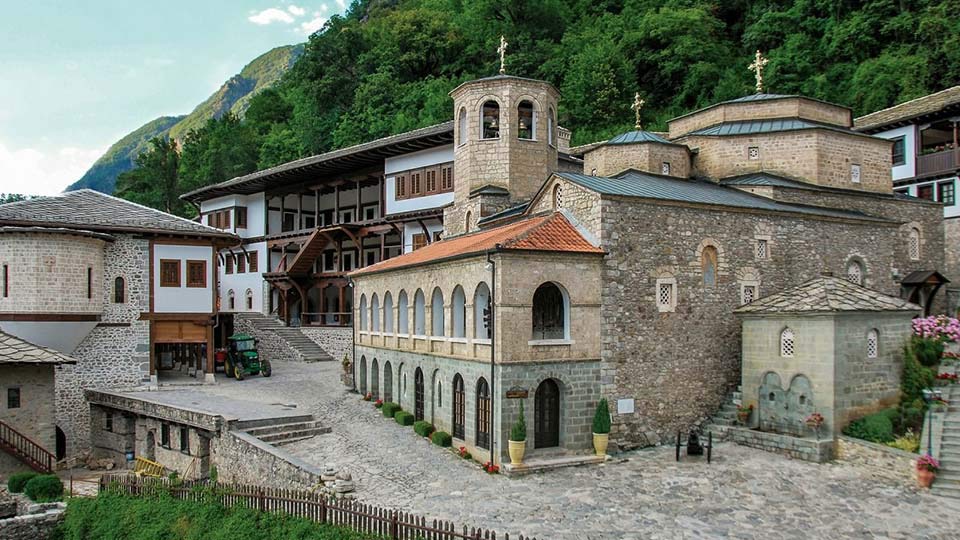 Additional information about the Polog region 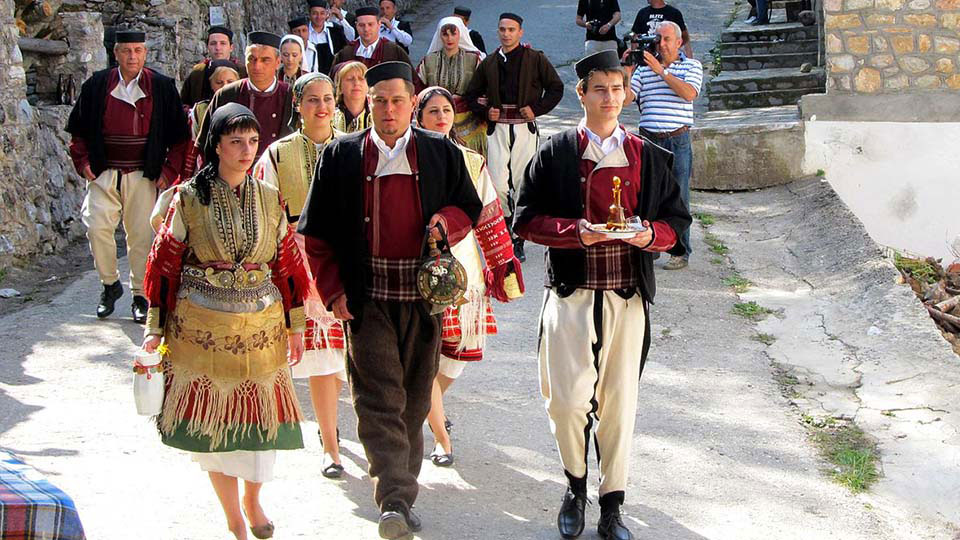 Mijaks - a part of the Macedonian people who live in the Mijak Region or the Dolna Reka Region beside the river Radika. They are known for their culture, architecture, customs and cultural and national heritage. The traditional Mijak costumes are widely known.


More information on the Polog region can be found in: Centre for development of the Polog planning region.