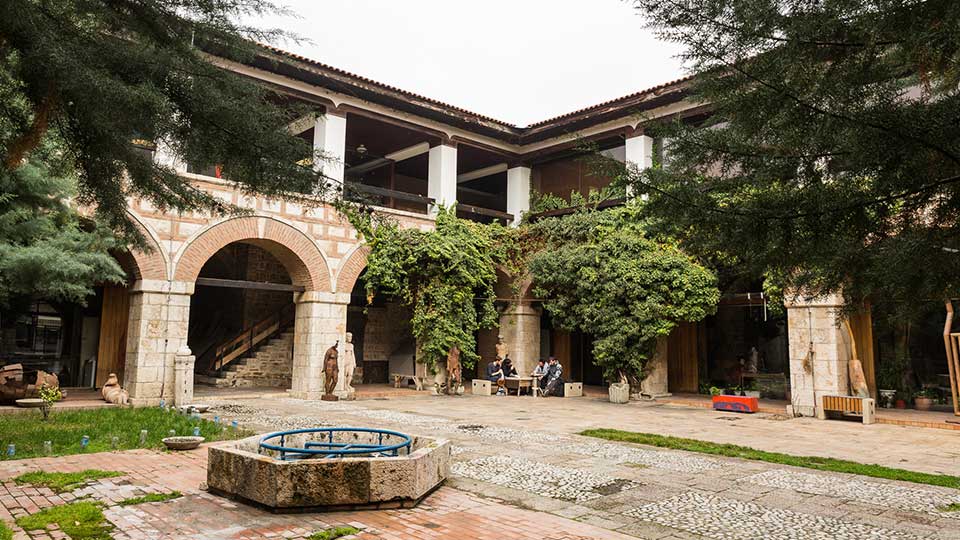 In the immediate vicinity of Chifte Amam and at the entrance to the bazaar on the side of Bit Pazar there is the former caravan-serraglio Suli an. It was built in the first half of the 15th century by Iskhak-Bey. In his honor it was left as part of the property of the Ishak-Bey (Painted) mosque. The an is first mentioned in the documents from the time of Isa-Bey, who is the son of Ishak-Bey, where a summary of the revenues and expenditures from the vakuf of Ishak-bey is shown. During the sixteenth century, it was converted and on the lower and upper floors shops were opened, mainly owned by Jews.

The an was badly damaged in the 1689 fire, after which it was restored and continued to operate as a commercial facility. After the 1963 earthquake it was almost completely destroyed, and later restored Today it houses the Museum of the Old Bazaar, and since 1982 the Art Academy, as well.


Architecture of Suli an

The building is a characteristic representative of the Islamic sacred architecture, and in its shape it is similar to the larger Kurshumli an. Its base is a square and covers an area of 2.101 m2. It was built in the same way as the other caravan-serraglios, with carved stone, rows of bricks and layered plaster. It consists of a ground floor and a floor with massive walls and vaults. The ground floor was used for keeping the cattle, while travelers and traders had an overnight stay on the floor. The porch was built on 18 pillars, and the rooms were arranged in a row and distributed on all four sides. There are two entrances to the an. One on the east and the other on the west side, the main one was found on the east and in the past before it flew the river Serava. Due to the large number of shops around, the an gives the impression that it is drawn into space.

In the Isa-Bey's covenant, the an is mentioned under the name "Old An". The name "Suli An", which in Turkish translation means "aquatic an", was later acquired, because it was located in the immediate vicinity of the flow of the Serava River.

More information about Suli an can be found on this website.