Kokino - megalithic observatory Kokino is located in the area of Staro Nagorichane municipality. The observatory is at a distance of about 75 km from Skopje, 35 km from Kumanovo. There is an asphalt road to it, and the last 500 meters should be walked to reach the Kokino Observatory itself. It is set on top "Tatichev Kamen", at an altitude of 1 030 meters. 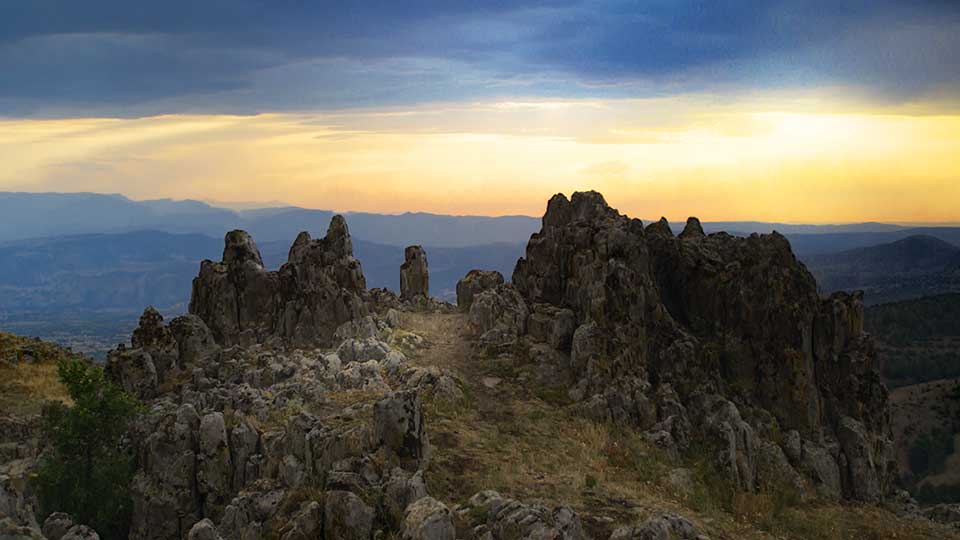 The observatory was discovered accidentally in 2001 by Bulgarian and Macedonian archaeologists. In 2002, the researches were started by the National Museum in Kumanovo. It is dated in 1800 BC, or early Bronze Age, and extends on an area of 5,000 square meters.


The megalithic observatory is located on a neo-volcanic hill. The rocks were created by hardening of the lava, which leaked from a volcanic crater. Time and erosion made cracks, and some of these slits were the main markers, through which the cycles of the Sun and the Moon were followed and time was measured.


The seven stone markers in the past marked the places for the rise of the Sun and the Moon in the short-day period, equinox and long-day period, as well as their deviations. The sun, in fact, only on Equinox - on March 21 and September 21 - rises exactly in the east and goes exactly to the west. Then, there is a gradual deviation of up to 45 degrees.


The rise spots are covered by the natural markers of the megalithic rocks in Kokino. They indicate that the rise of the Sun at the same place is repeated every 18.6 years. Probably some members of the tribal community had the task of daily observing the movements of astronomic bodies and making calendars. They then used them to determine the days of the ritual rites, as well as to start seasonal work in agriculture and animal husbandry. The Kokino Observatory is located on two rocky platforms from which the planets were followed. Traces of several objects and parts of ceramics were found on the upper platform. 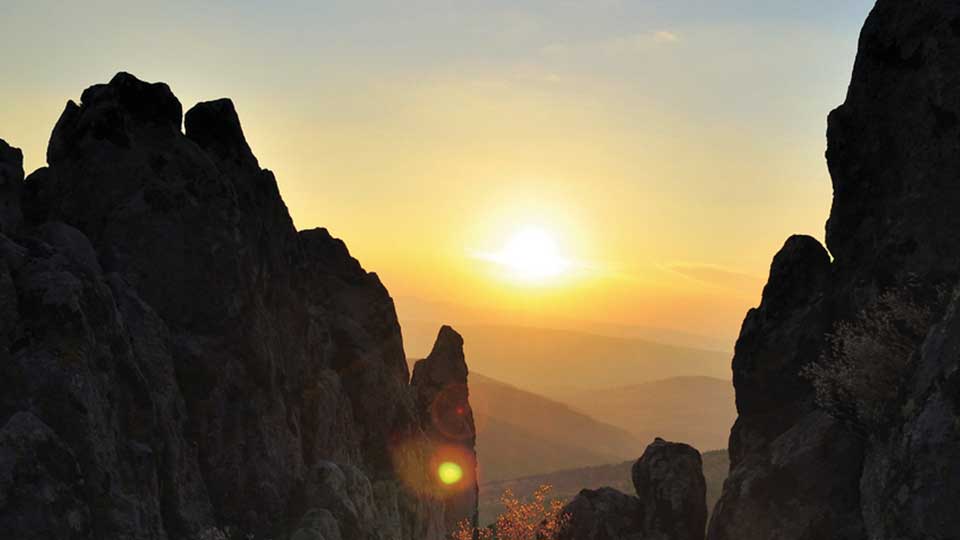 According to the findings of archaeologists at the Kokino site there were no dwellings, but the observatory was also a sanctuary. In the slits of the rocks objects were placed for their deities. The site also has a kind of throne, where the elders and leaders of the tribe were probably sitting. During the discovery of the site, numerous artifacts were found (ceramic bowls, amphoroid vessels, stone axes, etc.).


A number of artifacts have been discovered in special archaeological sites. Kokino has a dominant position on the hill above the immediate surroundings. It occupies a large radius of visibility from its peak. The top can be reached by a mild slope lit by the sun on its south-eastern side. Archaeological sites and the topographical features confirm its use as a mountain sanctuary, where Bronze Age inhabitants from the surrounding area performed some "mountain" rituals.


Almost all archaeological artifacts were found at the highest part of the site and slightly below, on the northern slope of the hill. During the archaeological researches, two types of ritual structures were identified: ritual pits and circular stone structures. The finding of a bowl-shaped vessel suggests that libation (spillage of liquids) has been applied. Many of the archaeological finds of Kokino date from the early Bronze Age (21th -17th century BC), as well as from the late Bronze Age (14th-11th century BC). Findings that date from the Middle Bronze Age are much less common.. 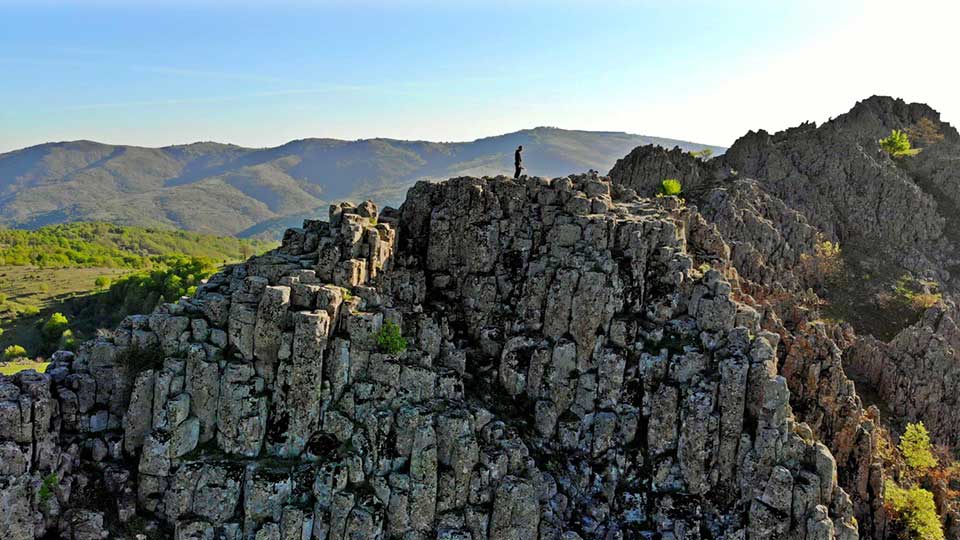 Archaeological excavations of Kokino have revealed traces of settlement from the Iron Age in the last few years (7th century BC), built on the southern slope of the hill. This is a key proof that after that the site was not used as a sanctuary, although it may have continued its use as an observatory. Archaeological findings found in the ritual pits and circular stone structures are ceramic vessels and their fragments. There are also handmade grain mills, pyramidal weights, spindles, moldings for casting bronze objects, stone axes, etc. In the ritual constructions are placed small ceramic figurines, with representations of parts of the human body and domestic animals.


About 100 ritual pits were found on the site, formed around natural slits in the rocks, by enclosing the opening of the slit with a smaller stones mixed with earth, and sometimes with clay. Archaeological artifacts are located at the bottom of the pits, covered with earth and a smaller stones. The opening of thus filled pits was surrounded by stone slabs that did not originate from the site.

The circular stone structures consist of circularly arranged larger naturally broken stones with a diameter of the circle of 1-2 m. After placing the gifts in the central part of the circle, the deposit was covered with earth and a smaller stones. The Ancient Observatory Kokino (or the Megalithic Observatory Kokino) is one of the most interesting segments of this site. The space used for this purpose is oriented west-east. It consists of a lower, western and higher, eastern platform (A and B), with a height difference of about 19 m. among them, as well as the western and northern astronomical platforms (C and D). Platforms A and B were used for rituals.


On the C platform, appropriate markers were used for observations. These are the rises of the sun in the days of summer long-day period and winter short-day period. The markers for the minimum and maximum declination of the full moon, in winter and summer, give the Observatory special significance.


The prehistoric inhabitants of this area knew that, on the same calendar day, the same phase of the moon appeared on the same place on the horizon every 19 years.


Astronomical research has shown that the astronomical platform C and the markers were made in the second half of the 19th century BC. On the basis of the observation of the full moon, prehistoric observers in the sky above Kokino made a calendar with a 19-year cycle. The creation of a calendar is a great achievement for the prehistoric inhabitants. This is evidence of the good organization of life and their spiritual culture.

More information about Kokino can be found on this website.