Matka - a piece of untouched nature

In the north-western part of Macedonia, near Skopje, the lake Matka is located on the river Treska. Lake Matka is the oldest artificial lake in Macedonia, the accumulation of which was built in 1938. The accumulation lake Matka, extends 7 km downstream along the Treska River, magnificently with its metallic gray - green color. The steep gray sedimentary dilapidated rocks, the favorite route and the eternal challenge of mountaineers - adventurers, rise high above the lake. And, with their coastlines, they sharply cut off the mysterious water surface of the lake. 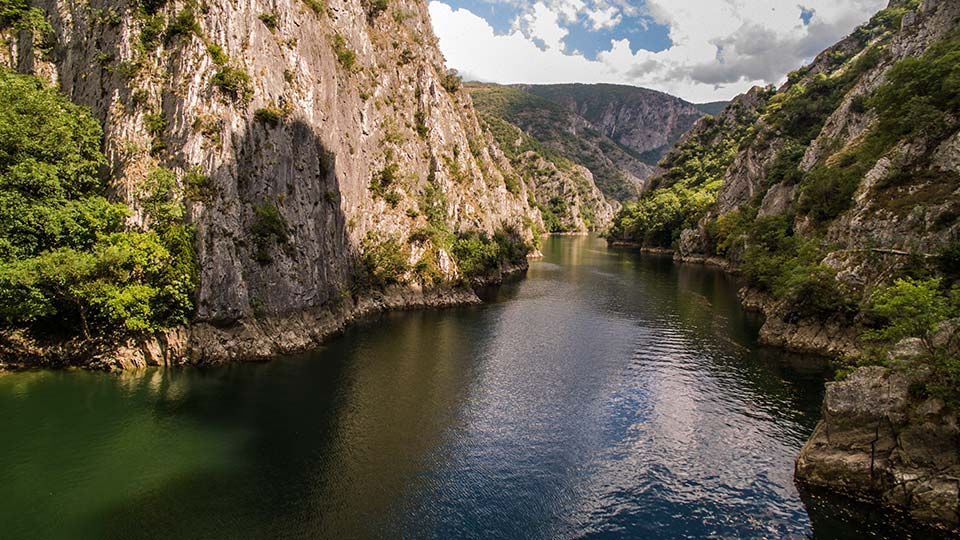 A beautiful piece of untouched nature, rich in rare animal species and endemic plants just 15km from the capital. Something that rarely any country in the world can be proud of. Matka is home to a great treasure of natural rarities, rich oak and beech forests, beautiful pink flowers of Natalie's Ramonda, white headed eagles, the unique butterflies and speleological objects. This location abounds with a number of cultural and historical monuments, mainly monasteries, due to which, rightly, they call it a small Mount Athos.


The temperature of the water in Lake Matka is 7 to 9 degrees Celsius, and the air temperature in the summer is about 9 degrees lower than that in the city. From the dam Matka 1 to Matka 2 there are nine kilometers, and to Kozjak a total of 25. It has been obtained by partitioning the river Treska with a dam ("St. Andreja"), and creating an artificial accumulation in the canyon Matka. The lake water is used for obtaining electricity, but also for irrigation of the villages in the surroundings. The lake is stocked and is often used for sports fishing. In this lake there is the underwater cave Vrelo, one of the deepest underwater caves in Europe, which has a depth of more than 203 m.

Matka is a natural canyon, which as a geographical relief is really special, and the speleological park is one of the most fascinating in the world. From about ten caves in the speleological park, Vrelo is the only one that currently functions as a tourist attraction. Its immediate vicinity to Lake Matka makes it most suitable for tourist exploitation. And the two lakes in the interior and the few beautiful and large cave galleries make it interesting for visitors. It can be reached in twenty minutes, by one of the four boats stationed in front of the Matka Canyon restaurant. In the cave itself there are many cave decorations, among which the huge stalagmite in the form of a cone dominates, which has accumulated for 2,700 years. The sounds that are constantly heard inside the cave come from its inhabitants - the bats. 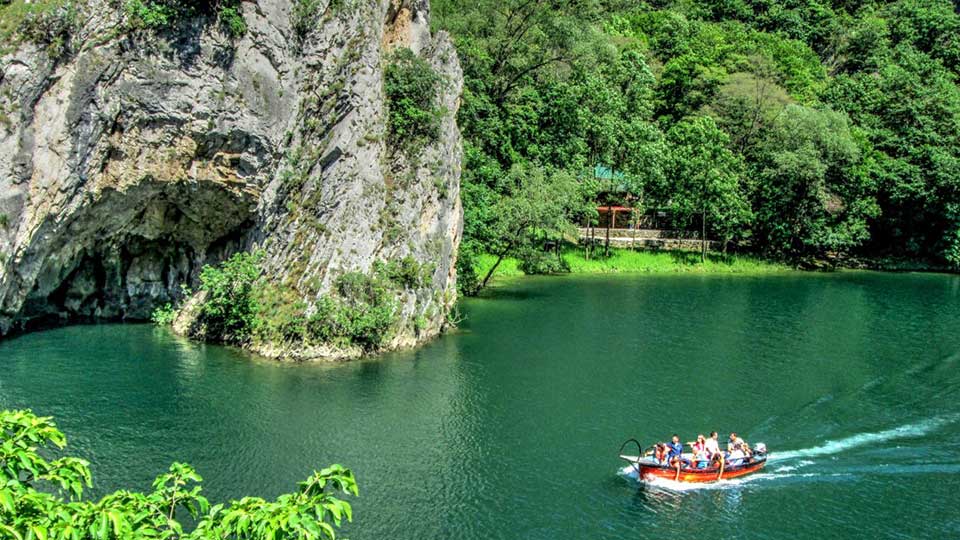 The research of the cave under Vrelo, which is filled with water, and is the only one in Macedonia of such type are still in progress, and according to the current research, it is expected that it will be the largest in Europe. Here one can see the vrelo that is assumed to come from Patishka Reka, found within a distance of 15 kilometers. Apart from the Vrelo Cave, there are also the caves Ubava and Krstalna.

Besides being protected as a monument of nature, Matka also abounds with a number of cultural and historical monuments, due to which they define it as a small Mount Athos. Now there are about a dozen monasteries, among which is the shisevski monastery, dedicated to St. Nikola, built or renovated in 1345, the monastery "St. Jovan Zlatoust " in the village of Kozarevo, the monastery "Holy Mother of God" near the village of Glumovo, the monastery " St. Andreja", the churches" St. Trojca"," St. Petka","St. Atanas "," St. Nikola" in Nir and "St. Nedela". The lovers of cultural and historical monuments can receive organized arrangements, including a visit to Markov Grad, a medieval settlement-fortress from the 14th century. In the fort there are remains of the churches "St.Nedela", "St. Gjorgji" and "St. Troica". 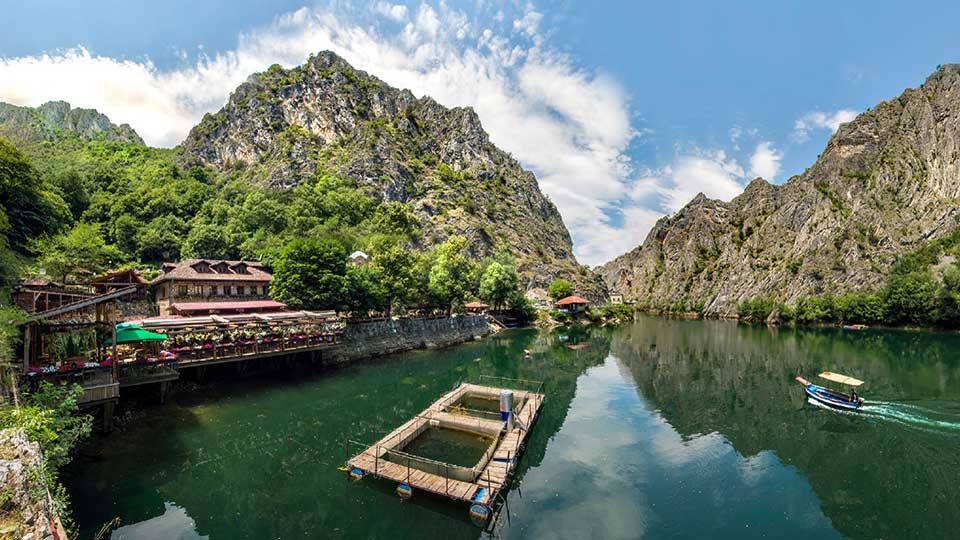 Here is the locality called Marko's Foot, which is linked to the legends of King Marko. One of them refers to the imprint in the wall of the monastery "St.Andrea", called Marko's palm. According to the legend, King Marko and his brother Andrea passed there and stopped to rest and refresh themselves. Andrea entered the meana that was located at the site of the current restaurant, in which there was a great Turkish asker. The Turks killed Andrea, and King Marko, after taking revenge, left a print from his palm in the wall of the monastery as a warning sign.

The most beautiful view from the monastery "St. Nikola" extends to the mountaineering home and to the monastery "St.Andrea". You can get there on foot for about 2 hours, and after landing down, you knock using the knocker and one of the boats will come to get you. "St. Jovan Zlatoust" is the next destination, and you have half an hour's walk to the healing spring there. To Markov Grad and the church "St.Nedela", it takes about 80 minutes. The numerous trails provide extraordinary experiences and are great recreation, and the greatest pleasure is provided by the wonderful breathtaking views. Many paths intertwine and complement each other, so, they say, it is impossible to get lost. 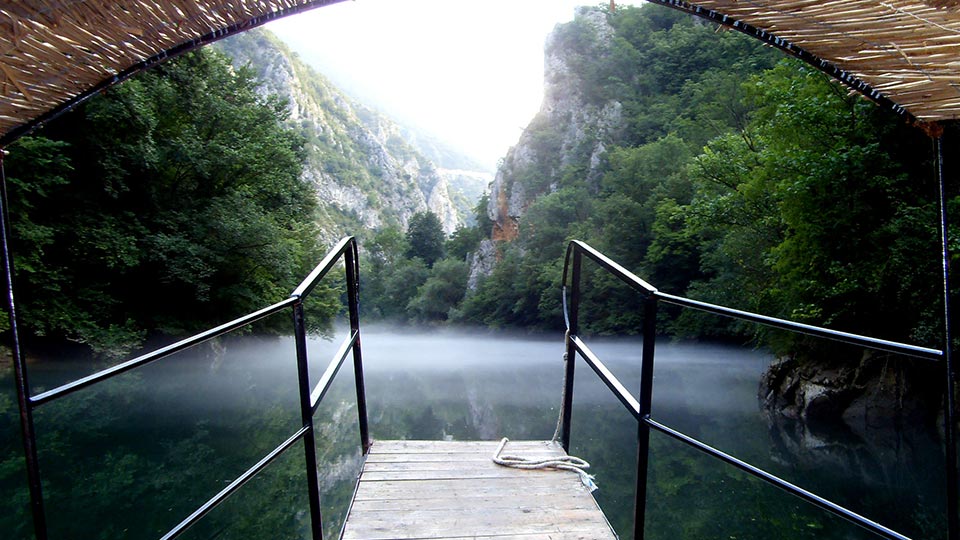 More information about Matka Lake can be found on this website.