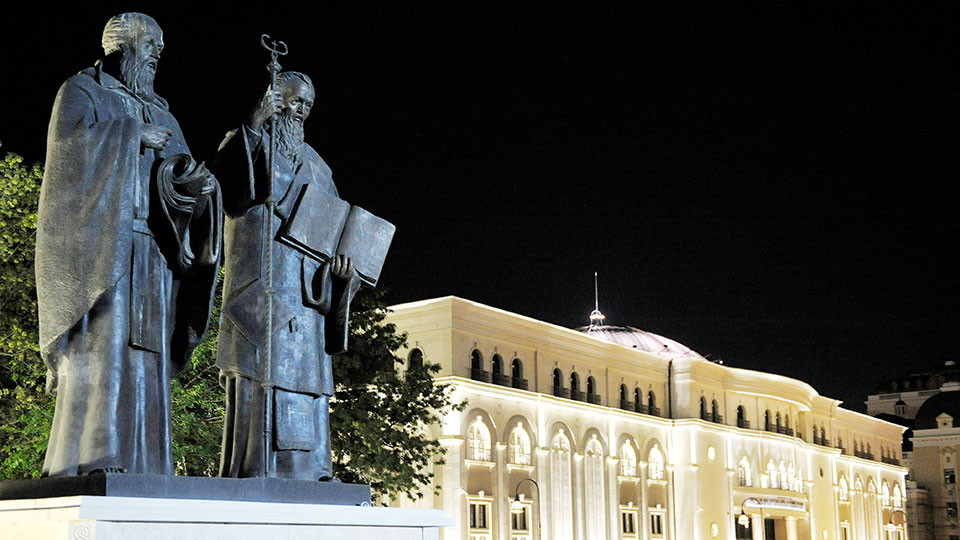 
Ss. Cyril and Methodius-life and work

Saints Cyril and Methodius (in Old Slavic: Кѷриллъ and Меѳодїи) - brothers born in Thessaloniki in the IX century, who became missionaries of Christianity among the Slavs of Greater Moravia and Pannonia. Through their work they influenced the cultural development of all Slavs, and therefore they received the title Apostles of the Slavs. They are credited with the invention of the glagolitic alphabet, the first alphabet used to prescribe the Old Slavonic language. After the death of the Holy Brothers Cyril and Methodius, their students continued their activity.


The two brothers Cyril and Methodius are respected in the Eastern Orthodox Church, as saints with the title Equal with the Apostles. In 1880, Pope Leo XIII introduced their glory in the calendar of the Roman Catholic Church. In 1980, John Paul II declared them Europe's co-defenders, along with Benedict of Nursia.


St. Cyril and St. Methodius of Thessalonica were born brothers from Thessalonica, from a respectable Byzantine family, Father Leo and mother Mary. The elder brother, Methodius, spent ten years among the Macedonian Slavs as an officer. Then he moved away to Mount Olympus and surrendered to a monastic struggle. Cyril (Constantine the Philosopher) later joined him here. Cyril and Methodius, known as Thessalonica brothers enlighteners, play a major role in Slavic history.


Their work made the Slavic peoples literate. At the beginning of the IX century, a solid foundation for wider and more organized missionary activity in Western Bulgaria was already prepared. At that time, the Byzantine Empire experienced a new bloom on a cultural level, so this wave splashed the cities that were distant from Constantinople, especially Thessaloniki. In the first decades of the IX century, the family of a high official of the imperial authority, an assistant to the Byzantine strategist of Thessaloniki and the Thessaloniki district, lives in Thessaloniki. It was Leo with his wife, Mary. Their nationality is unclear. The family had several children, but only the names of the eldest are mentioned - Methodius and the smallest Constantine. The secular name of Methodius, who received this name when he became a monk, was not mentioned.


The pious parents taught their children from the earliest childhood about Christianity, trying to help them apply the supreme Christian truths in their lives. From his youth, Constantine dealt with the writings of Saint Gregory of Nazianzus and Dionysius Aeropagic. His father sent him to Constantinople to continue his education at the Imperial Magnaur school, where, apart from the theological sciences, he studied grammar, arithmetics, geography, astronomy, music, poetry, rhetorics. In addition to these sciences, Constantine also studied languages - Latin, Hebrew, and Syrian.


After completing his higher education, Constantine was appointed as a librarian at the Church of H. Sophia, and then was appointed professor of philosophy at the school he finished. Then he got the name Constantine the Philosopher.

The missions of Cyril and Methodius

As highly educated and talented individuals, Cyril and Methodius will be given many difficult and responsible tasks by the Byzantine court. First they were sent to a mission among the Saracens (the Arabs) in Baghdad, which, like the Khazar and Moravian mission, were part of the Byzantine political program, the main goal of which was to Christianize the Saracens, the Khazars, the Moravian Slavs, the Bulgarians, the Russians and other peoples in the east and north of Byzantium and to impose the Byzantine ecclesiastical authority on them.


When the Khazar king Kagan asked the emperor Michael for preachers of the faith of Jesus Christ, then on the command of the emperor, these Cyril and Methodius were found and were sent among the Khazars. After they had convinced Kagan in the Faith of Christ, they baptized this king and a large number of his armies and even more numerous people. After a while they returned to Constantinople, where they compiled the Slavic alphabet of thirty-eight letters and began to translate the church books from Greek to Slavic. On a call from Emperor Rostislav, Cyril and Methodius went to Moravia and spread and determined the Orthodox Faith there, they multiplied the books and gave them to the priests to teach the youth. And later on the pope's call they left for Rome, where Cyril fell ill and died on February 14, 869.


Then Methodius returned to Moravia and, until his death, strove for the establishment of Christ's faith among the Slavs. After his death - and he went to the Lord on April 6, 885 - his disciples Pentecostal, led by St. Clement of Ohrid as bishop, crossed the Danube into a raft of "three lime trees" and arrived in Belgrade, then in Bulgaria. The head of Belgrade sent them to Emperor Boris I. St. Naum stayed in the capital of Bulgaria and laid the foundations of the Preslav Literary School, and Clement was sent to the Kutmichevica area, south of Macedonia, where he continued working from Ohrid among the Slavs in the same work that Methodius and Cyril started in the north.


As far as Methodius is concerned, there are very scarce resources, according to which he acquired secular education and devoted himself to state and military service. He was gifted with Christian virtuous life and state and military capabilities. For a long time he managed the Bregalnica area and contributed to the Christianity to be deeply implanted in the Macedonian soul in that part of Macedonia. His brother Constantine was particularly deserving of this success. The missionary activity of the holy brothers Cyril and Methodius among the Macedonians, especially the restoration and the application of the Macedonian alphabet, has been noted in the story of St. Naum. This preceded the translation of sacred books into the language of the Macedonians from Thessalonica and the missionary work among the Western Slavs in Moravia.


For some time before their missionary activity, the holy brothers Cyril and Methodius retreated to the monastery Polychron on the Mount Olympus, where they finally prepared for their epoch-making missionary work. The monastic loneliness was interrupted twice when they were sent by the Byzantine authorities from the Constantinople patriarch to the missions among the Saracens and the Khazars. These missions were completed by them with great success. In the short story of Constantine-Cyril, written by his disciple St. Clement of Ohrid, it is said that Cyril discovered before the Khazar Kagan that he did not originate from the Byzantine genus, but his grandfather was from the people of a foreign "king", but fled to Byzantium.


Rostislav, the prince of Great Moravia, sent a request to the Byzantine Emperor Michael III to send a bishop and teacher, who would explain in their language the true Christian faith. The choice fell to the holy brothers Cyril and Methodius. They were almost ready for this mission, because many of the holy books were already translated into Slavic language. They chose worthy disciples and assistants and traveled to Moravia. They were welcomed with great joy and great honor there. Shortly afterwards, they opened a school, where future clergymen and teachers were prepared for the Western Slavic peoples.


Cyril and Methodius here encountered great resistance from German priests, who blamed them for heresy. They were invited to Rome to prove their true faith. In Rome they were received with great honors by the Pope Adrian II. He approved the Slavic worship books and ordered for them to be placed in the altar of the church of Santa Maria Maggiore and worship services in the Slavic language in three Roman churches to be performed. In Rome Cyril became ill and died on February 14, 869. Methodius continued the epoch-making missionary work among the Western Slavs with the help of his disciples, who were ordained in Rome in the priesthood. The hostility of the German priests did not cease.


Conquered by efforts and torments, Saint Methodius died in Nitra, 885 AD. His disciples were subjected to torture and persecution. Some of them were sold as slaves.


For these and such merits, in his apostolic epistle, egrigae virtulis, Pope John Paul II declared Cyril and Methodius on December 31, 1980 as co-patrons of Europe, the patron of which is St. Benedict, proclaimed by Pope Paul IV on October 26, 1964. .


More information about Cyril and Methodius - The Holy Brothers can be found on this website.