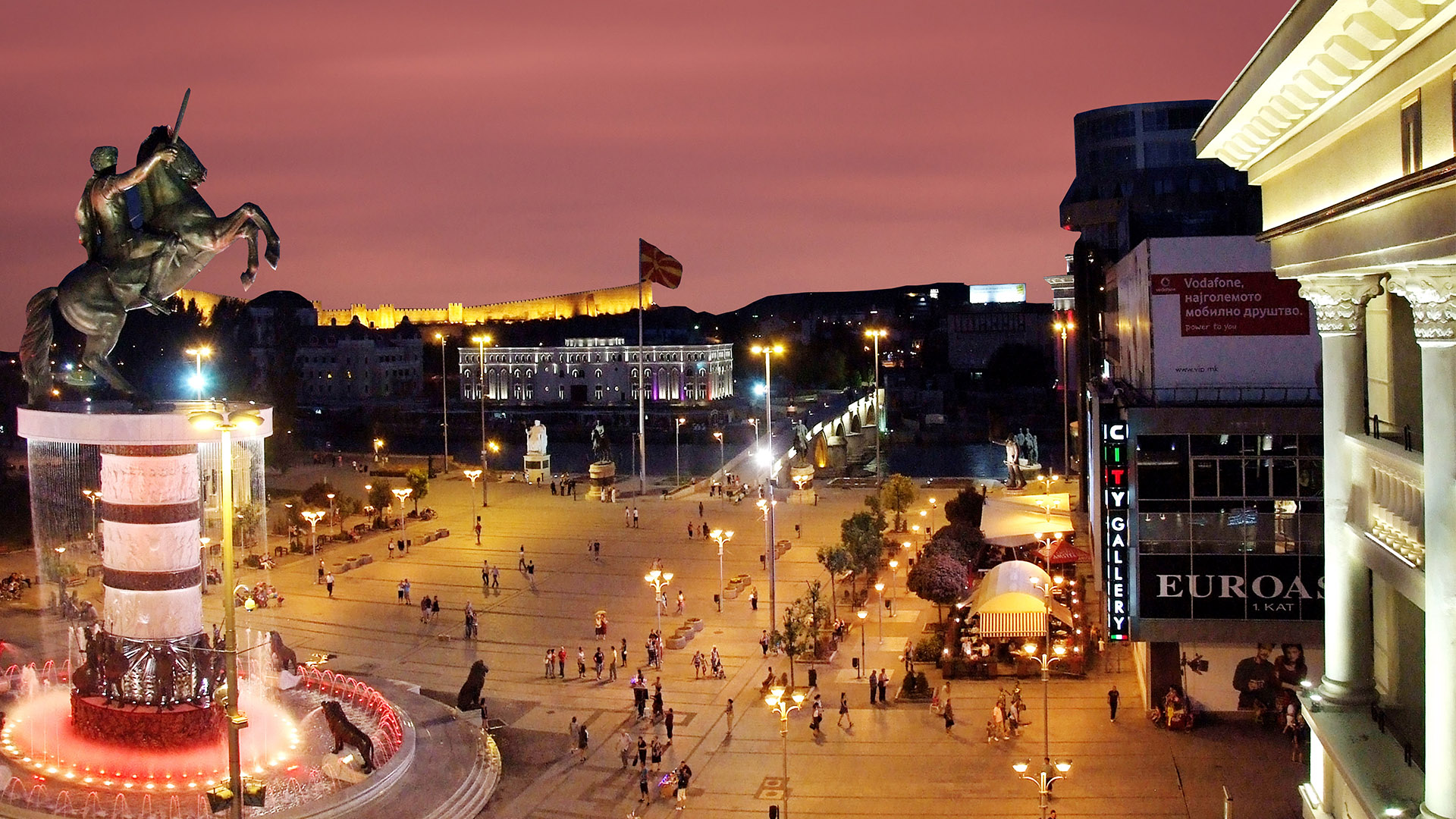 The capital and at the same time the biggest city in the Republic of Macedonia has about 800,000 inhabitants. Needless to say, it is the most important political, cultural, economic and academic center of the country.

In the first records dating to the Roman period, reference is made to an urban union at the same site, on the banks of the River Vardar, under the name of Skupi. As a city of rich and turbulent history, Skopje has risen like a phoenix from its ashes after two devastating earthquakes (518 and 1963). It reached the peak of development during the last 50 years, a period of great industrial advancement, with the most outstanding branches being metal, chemical, textile, leather and graphic industries. Along with the rapid industrial development, Skopje developed in the fields of commerce, banking, culture and sports, which gave a different dimension to the city. In the last 20 years, this city has indisputably grown to one of the more significant cities in the Balkan Peninsula. Skopje, and especially its center, contains interesting landmarks which deserve special attention – the old railway station (reminder of the 1963 earthquake), museum of archaeology, the memorial house of Mother Teresa (Agnes Gonxha Bojaxhiu, Nobel prizewinner for peace in 1979, born in Skopje, in 1910), the square of Macedonia with a variety of monuments, the Stone Bridge, Museum of the Macedonian Struggle the Holocaust Museum, the Old Bazaar, the church of St. Spas with the marvelously manufactured engraving (19 century), the Bath of Daut Pasha – presently an art gallery, one of the greatest and most beautiful examples of the Ottoman architecture in the Balkans – the inn of Kapan Khan (15 century), the mosque of Mustafa Pasha (15 century), etc. The Millennium Cross on Mount Vodno is considered the biggest cross in the world, sharing this reputation with the San Lorenzo de El Escorial (Central Spain).

Departure from the hotel after breakfast (you will be notified about the exact time by our agent/host and it will also be posted on our info-board). Full day excursion.

Program: We travel towards the capital Skopje and enjoy the scenery. We stop for a short break at the mountain pass called Straza. Before the capital first we will visit Matka canyon - an exceptional object of nature. After arrival in Skopje the walking tour  starts from the old railway station where you will see the old clock witch reminds us of the earthquake in 1963, with walking we go to visit Mother Teresa's Memorial House. We move on and walk through the square, across the Stone Bridge and visit the Museum of the Macedonian Struggle. The next destination of the group is the old part of Skopje passing by the Holocaust Museum, the church of St. Dimitrija, Daut Pasha Bath, the church of St. Spas, Mustafa Pasha Mosque and the fortress called Kale. We stop by Skopje Fortress KALE, which the symbol of the city and at the moment being refurbished. About one hour of free time can be used to enjoy in the ambiance of Skopje Old Shopping District, with a possibility to buy souvenirs.